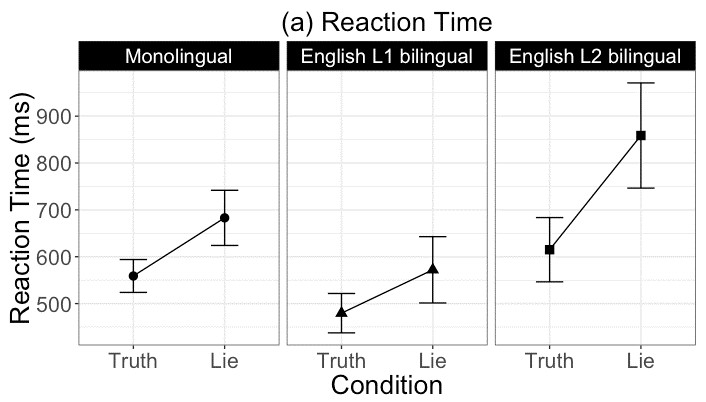 Legend: Average reaction time in milliseconds during truth and lie trials by group, with standard deviation bars. All participants were slower to produce lies than truths. However, this effect was significantly more robust for bilingual speakers of English as the second language (English L2 bilinguals) than for monolingual speakers of English and for bilingual speakers who spoke English as their native language (English L1 bilinguals). These findings suggest that a combination of producing deceptive speech and using a second language puts an extra load on the speaker.

Abstract: Acoustic cues to deception on a picture-naming task were analyzed in three groups of English speakers: monolinguals, bilinguals with English as their first language, and bilinguals with English as a second language. Results revealed that all participants had longer reaction times when generating falsehoods than when producing truths, and that the effect was more robust for English as a second language bilinguals than for the other two groups. Articulation rate was higher for all groups when producing lies. Mean fundamental frequency and intensity cues were not reliable cues to deception, but there was lower variance in both of these parameters when generating false versus true labels for all participants. Results suggest that naming latency was the only cue to deception that differed by language background. These findings broadly support the cognitive-load theory of deception, suggesting that a combination of producing deceptive speech and using a second language puts an extra load on the speaker.

About the Lab: We want to know how language and cognitive skills fluctuate with linguistic experience. With this general goal in mind, we study how bilingualism influences linguistic and cognitive functioning in children who are typically developing, as well as in children with communication impairments, including children with language delay, developmental language disorder, and autism. We also study factors that can facilitate second language acquisition in adulthood, as well as factors that influence how fluent bilingual adults process their two languages. Visit the Language Aquisition & Bilingualism Lab more information.