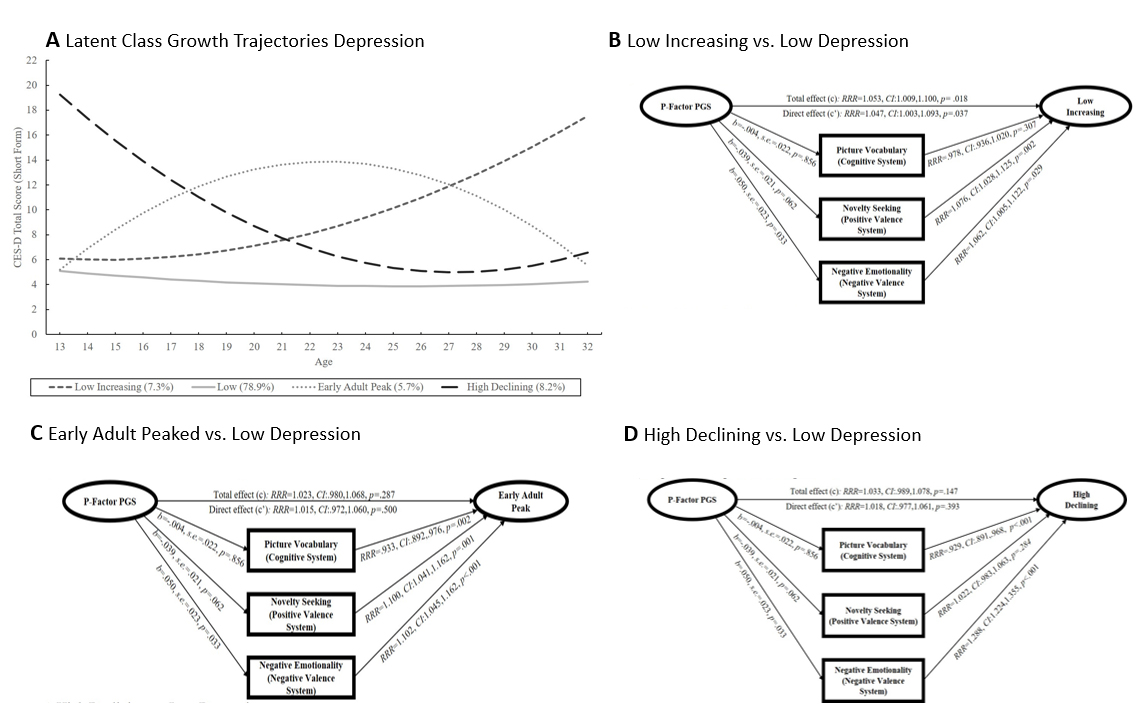 Abstract: There is substantial heterogeneity in the development of depression from adolescence into adulthood. Yet, little is known about the risk factors underlying its various patterns of development. For instance, despite the discovery of genetic variants for depression, these discoveries have not accounted for the high degree of genetic covariation between multiple disorders, nor have they been applied to disambiguate its heterogeneous developmental presentations. This study examined the association between a transdiag- nostic polygenic score for psychopathology (p-factor PGS) and depression trajectories, spanning early adolescence into adulthood, in the National Longitudinal Study of Adolescent to Adult Health (N 􏰁 7,088). We examined whether subconstructs of the Research Domain Criteria’s (RDoC) negative valence (i.e., negative emotionality), positive valence (i.e., novelty seeking), and cognitive systems (i.e., picture vocabulary) could explain how the p-factor PGS eventuates into the various pathways of depression. Four trajectories were identified: low depression (78.9%), low increasing (7.3%), high declining (8.2%), and early adult peaked (5.7%). The p-factor PGS was significantly higher in all depressive trajectories relative to the low-depression trajectory but was predictive of only the trajectory that showed increasing depression over time: low increasing. A specific indirect path emerged by which the association of p-factor PGS on early adult peaked and high-declining depression operated through the effects of negative emotionality but not picture vocabulary or novelty seeking. Findings reinforce the crucial role of development in genetically informed RDoC models of depression, because there appear to be distinct correlates and risk factors that underlie the various developmental pathways of depression.

About the Lab:  James Li’s lab (the Social and Behavioral Development Lab) investigates genetic and environmental factors that contribute to the development of child externalizing disorders (e.g., attention-deficit/hyperactivity disorder, oppositional defiant disorder, and conduct disorder). Research in the lab utilizes molecular genetic approaches (e.g., genome-wide association scans, gene-pathway analysis) to advance understanding about the genetic architecture underlying complex developmental phenomena. They also focus on rigorous measurements of early environmental influences as they relate to child behavioral problems, not only for risk factors such as negative parenting and maltreatment, but also for enriched factors such as positive parenting and social support. The goal of this research is to understand how genes and environments independently and interactively influence variation in child social and behavioral development, and to ultimately bridge the substantial gap between genetics/neuroscience and prevention/intervention.