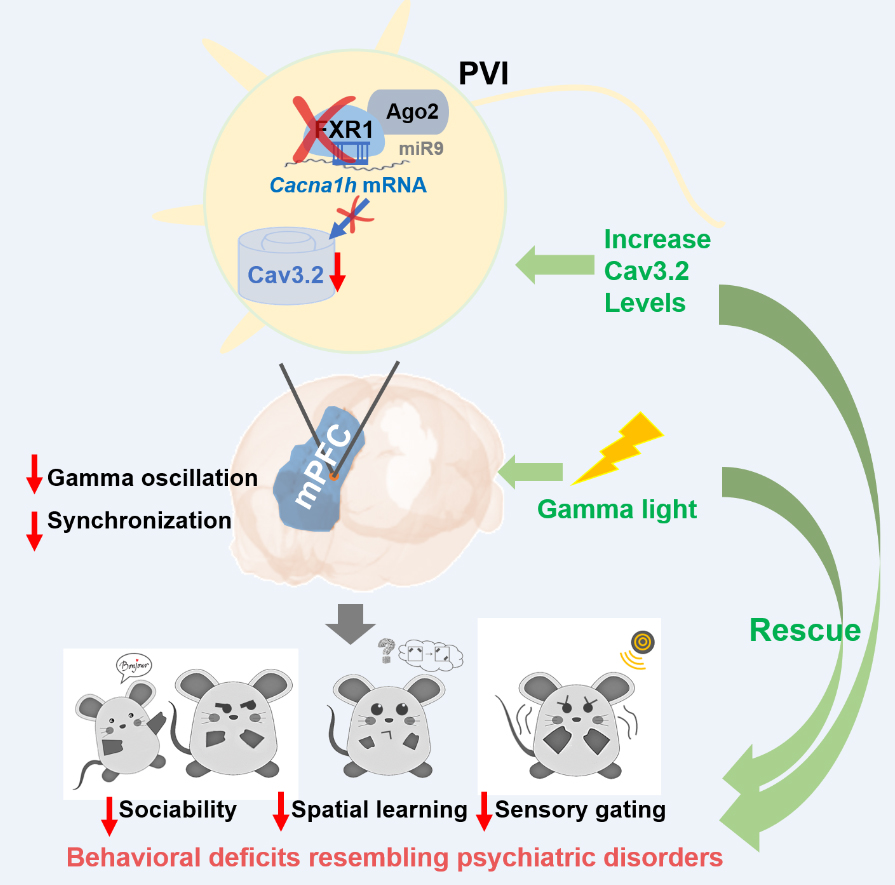 A new study from the lab of Waisman investigator Xinyu Zhao, PhD, brings us one step closer to identifying treatments for psychiatric disorders like schizophrenia (SCZ) and illuminates the role of a specific gene in regulating the disorder.  “Regulation of Cav3.2 by schizophrenia risk gene FXR1 is critical for interneuron functions and social behaviors” was published in the journal Molecular Psychiatry in April. The study also identifies a specific gene as the regulator of a type of neurons that plays a critical role in the pathogenesis of certain psychiatric disorders.

Presently, psychiatric disorders such as SCZ and bipolar disorder (BPD) affect between 18 and 36 percent of adults worldwide, or about 7 percent of the global population. “SCZ is a devastating disorder, presenting with a variety of debilitating symptoms, including hallucinations, delusions, flattened affect, associability, disordered thought, and impaired working memory,” the authors write.

Because the molecular and neural basis for SCZ is not yet understood, finding adequate treatment for such disorders has remained elusive. Using a form of treatment called gamma flicker light on mouse models, however, Zhao and her team have developed the framework for mitigating SCZ-like symptoms.

“The fact that the gamma light treatment can relieve this psychiatric disorder’s symptoms likely provides a non-invasive and pretty inexpensive treatment for this disease,” Zhao says. “We hope that our results can provide need for others to follow up on this.”

In addition to this treatment, the work also identifies the gene FXR1 as a regulator of the mechanisms behind SCZ.

Previous studies have associated SCZ with both FXR1 and Parvalbumin interneurons (PVI), a type of neurons called interneurons that modulate the activities of other neurons. “We know that FXR1 is a high confident SCZ-risk gene and that PVIs are critical to brain function in psychiatric disorders, but linking these two has not happened before,” Zhao says.

With these studies in mind, Waisman researcher Minjie Shen, PhD, a postdoctoral fellow leading this project, deleted the FXR1 gene only from PVIs in the prefrontal cortex.

“We wanted specifically to delete FXR1 in interneurons in the prefrontal cortex because that is the region of the brain that is heavily involved in psychiatric disorders,” Zhao says.

Once the genes were deleted from these specific neurons, the researchers found the mice exhibiting symptoms similar to those of SCZ. Those symptoms included hyperactivity, deficits in working memory, impaired social interaction, and reduced sensorimotor gating, which reduced the ability to filter out redundant or unnecessary external stimuli.

“We saw significant changes in social interaction, learning memory, cognitive function, and also hyperactivity,” Zhao says. “These have not been shown in previous studies when FXR1 was deleted in excitatory neurons. We suddenly realized that FXR1 has a much stronger function in inhibitory neurons. When we saw that, we said we probably just hit the jackpot in understanding both the function of FXR1 and the importance of interneurons.”

“Balance is important,” Zhao says. “Too much excitation or too little inhibition can result in imbalance. So that’s why a number of drugs have been developed to bring up inhibition as a way to treat brain disorders including autism, schizophrenia, and brain injuries.”

This study also shows a correlation between the downregulation of FXR1 and the protein Cav3.2. “We found that the reason why FXR1 deletion can cause impaired activity in PVIs is at least partially due to reduced Cav3.2 levels in the PVIs,” Zhao says.

Cav3.2, encoded by the gene CACNA1H, is a voltage-gated calcium channel that mediates the influx of calcium into neurons upon neuronal activation. “Calcium levels and signals are critical for neuronal excitation,” Zhao says. “It is an essential step of neuronal activity.” Mutations in the human CACNA1H gene have been found in epilepsy and autism.

In the past, when FXR1 was deleted from the excitatory neurons that are majority of brain neurons, only mild deficits were observed. And yet, Zhao says, when the gene is deleted from less than 10 percent of all neurons – the PVIs – the impacts are great. “This tells us how important interneurons are in brain and behavior,” she says.

She is also confident that this research paper establishes a method that can be applied to other genes, not just FXR1.

“The methodology we established can be applied to other genes as a way to understand how those schizophrenia genes may affect them,” Zhao says.

This study also involved collaboration with the labs of Waisman director Qiang Chang, PhD, and Waisman investigator Daifeng Wang, PhD. “That is just the environment of the Waisman Center,” Zhao says. “We have a really collaborative group of people to help us out.” This project is funded by an active RO1 grant from NIMH to Zhao and a U54 Center grant to the Waisman Center.