Title: A 16-year study of longitudinal volumetric brain development in males with autism

Legend: We used an accelerated longitudinal design to assess and scan males with ASD and typically developing controls (TDC) over 16 years (Table 1, Fig 1). ASD participants met ADI-R, ADOS-2, and DSM 5 Expert Consensus criteria for a diagnosis of ASD at Time 1. We compared longitudinal brain volume trajectories between the ASD and TDC groups. After childhood, the trajectories of Whole Brain Volume and most other brain volumes were similar in the ASD and TDC groups (Fig 2). Longitudinal ventricular volume atypically increased and corpus callosum volume atypically decreased during adulthood in the ASD group (Fig 2).

Time 5 ADOSs (all module 4) were blindly reviewed. Using all available current data (only T5 data), participants were given a Time 5 current ASD classification. We were surprised to find two subgroups. ASD severity was similar in the 2 subgroups when the participants were 4-5 years of age. But at Time 5, when essentially all the original participants were adults, most (80%) of the original ASD participants had persistently active ASD, but ASD was partially or fully remitted in 20% (Fig. Time point 5 Module 4 ADOS results). We determined if longitudinal brain structure trajectories differed between the Persistent vs. Remitted ASD groups. The subgroup with persistent ASD had persistently smaller corpus callosum volumes compared to the remitted group The trajectories in Fig.3 suggest 1) persistently larger corpus callosum volume, an index of interhemispheric connectivity, is associated with remission of ASD in adulthood; and 2) corpus callosum volume is functionally different in individuals with persistent autism versus typical controls.

(Please Note: a) “Remission” was defined as falling below the ADOS-2 cutoff for a current classification of ASD and not meeting DSM 5 symptom criteria for ASD based only on current behaviors at Time 5; b) All Longitudinal Imaging analyses included IQ as a covariate and were corrected for multiple comparisons.)

Abstract: Autism spectrum disorder (ASD) is a neurodevelopmental disorder with unknown brain etiology. Our knowledge to date about structural brain development across the lifespan in ASD comes mainly from cross-sectional studies, thereby limiting our understanding of true age effects within individuals with the disorder that can only be gained through longitudinal research. The present study describes FreeSurfer-derived volumetric findings from a longitudinal dataset consisting of 607 T1-weighted magnetic resonance imaging (MRI) scans collected from 105 male individuals with ASD (349 MRIs) and 125 typically developing male controls (258 MRIs). Participants were six to forty-five years of age at their first scan, and were scanned up to 5 times over a period of 16 years (average inter-scan interval of 3.7 years). Atypical age-related volumetric trajectories in ASD included enlarged gray matter volume in early childhood that approached levels of the control group by late childhood, an age-related increase in ventricle volume resulting in enlarged ventricles by early adulthood and reduced corpus callosum age-related volumetric increase resulting in smaller corpus callosum volume in adulthood. Larger corpus callosum volume was related to a lower (better) ADOS score at the most recent study visit for the participants with ASD. These longitudinal findings expand our knowledge of volumetric brain-based abnormalities in males with ASD, and highlight the need to continue to examine brain structure across the lifespan and well into adulthood.

About the Lab: Research in the Lainhart lab focuses on understanding brain growth, development, and maturation in ASD from the prenatal period into adulthood. Lainhart leads a multidisciplinary research team that uses high-resolution brain scanning to determine changes in the brain that are specific to ASD and linked to clinical symptoms, course, and outcome. The goal of this research is to identify biomarkers of ASD that can be used in determining the causes of ASD, the brain mechanisms involved, early diagnosis, preventive interventions, and treatment. Lainhart’s research is funded in part by the National Institutes of Mental Health and the Autism Speaks Foundation. 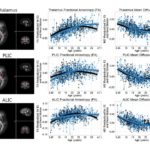 The thalamus is a key sensorimotor relay area that is implicated in autism spectrum disorder (ASD). However, it is unknown how the thalamus and white-matter structures that contain thalamo-cortical fiber connections (e.g., the internal capsule) develop from childhood into adulthood and whether this microstructure relates to basic motor challenges in ASD. 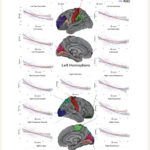