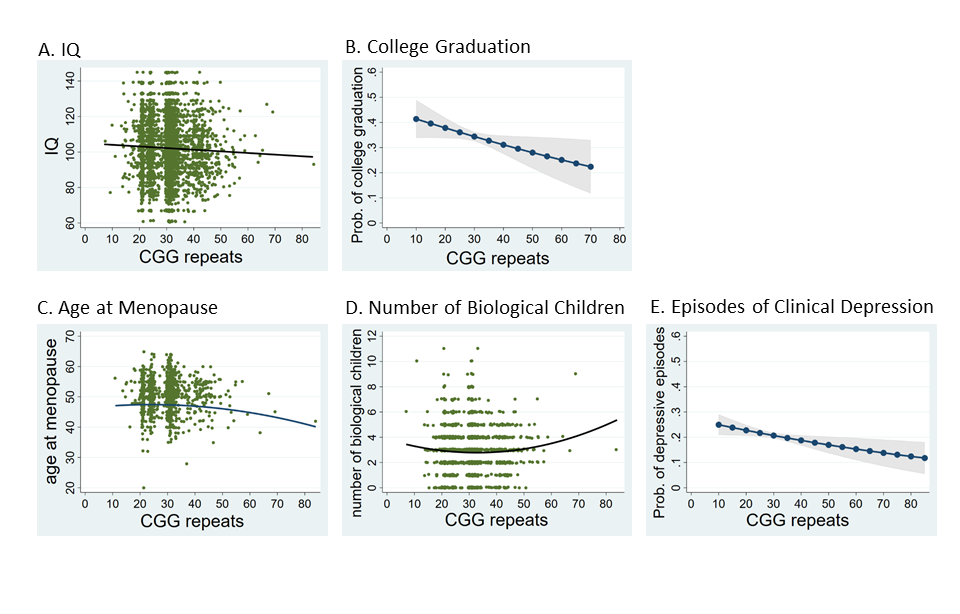 Abstract: FMR1 CGG repeat length was assayed in 5499 research participants (2637 men and 2862 women) in the Wisconsin Longitudinal Study (WLS), a population-based cohort. Most past research has focused on clinically-ascertained individuals with expansions in CGG repeats, either those with fragile X syndrome (> 200 CGG repeats), the FMR1 premutation (55-200 repeats), or in the gray zone (variously defined as 45-54 or 41-54 repeats). In contrast, the WLS is a unique source of data that was obtained from an unselected cohort of individuals from the general population for whom FMR1 CGG repeat length was assayed. The WLS is a random sample of one-third of all high school seniors in the state of Wisconsin in 1957. The most recent round of data collection was in 2011; thus, the study spanned over 50 years. Saliva samples were obtained from 69% of surviving members of the cohort in 2008 and 2011, from which FMR1 CGG repeats were assayed. With one exception, the CGG repeat length of all members of this cohort was below 100 (ranging from 7 to 84). The present study evaluated the genotype-phenotype associations of CGG repeat number and IQ, college graduation, age at menopause, number of biological children, having a child with intellectual or developmental disabilities, and the likelihood of experiencing an episode of depression during adulthood.  Linear and curvilinear effects were probed. Although effect sizes were small, significant associations were found between CGG repeat length and high school IQ score, college graduation, number of biological children, age at menopause, and the likelihood of having an episode of depression. However, there was no significant association between repeat length and having a child diagnosed with an IDD condition. This study demonstrates a continuum of phenotype effects with FMR1 repeat lengths and illustrates how research inspired by a rare genetic condition (such as fragile X syndrome) can be used to probe genotype-phenotype associations in the general population.

About the Lab: The Lifespan Family Research Program is dedicated to the advancement of knowledge about families who have a member with intellectual and developmental disabilities with a special emphasis on how these families change over the lifespan. Our program of research focuses on autism, fragile X syndrome and other developmental and mental health conditions. We study cohorts of families who have generously volunteered to be members of our longitudinal research, and we are extremely grateful to them for their continued participation.  In addition, we study representative population cohorts including the Wisconsin Longitudinal Study, the Midlife in the United States (MIDUS) Study, and Personalized Medicine Research Project of the Marshfield Clinic.