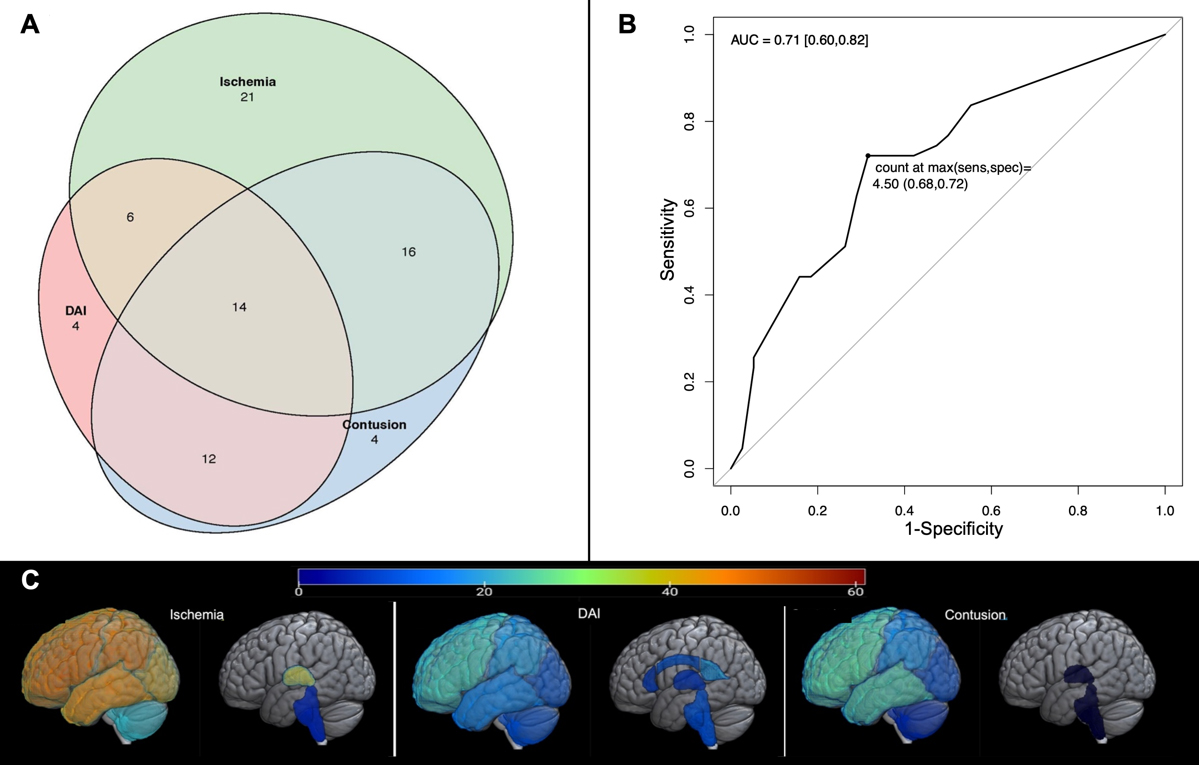 Legend: Clinical MRI scans obtained within 30 days of injury were assessed in 81 infants with severe traumatic brain injury and patterns of injury were characterized.  (A) Venn diagram illustrating number of subjects affected and co-occurrence of the 3 most prevalent intracerebral lesions: Diffuse Axonal Injury (DAI), Ischemia, and Contusion.  (B) Receiver Operating Characteristic (ROC) curve for ischemia predicting abusive head trauma as mechanism of injury. Area under the curve (AUC) with 95% CI is shown for the number of brain regions with ischemia. The maximum sensitivity and specificity threshold occurred at 4.5 ischemic regions. (C) Heat maps demonstrating number of subjects with lesion in each brain region are shown. For cerebral lobes, this represents number of subjects with lesion in either hemisphere.

Abstract: Young children with severe traumatic brain injury (TBI) have frequently been excluded from studies due to age and/or mechanism of injury. Magnetic resonance imaging (MRI) is now frequently being utilized to detect parenchymal injuries and early cerebral edema. We sought to assess MRI findings in infants with severe TBI, and to determine the association between specific MRI findings and mechanisms of injury, including abusive head trauma (AHT). MRI scans performed within the first 30 days after injury were collected and coded according to NIH/NINDS Common Data Elements (CDEs) for Neuroimaging in subjects age &lt; 2 years old with severe TBI enrolled in the Approaches and Decisions in Acute Pediatric Traumatic Brain Injury Trial. Demographics and injury characteristics were analyzed. A total of 81 children were included from ADAPT sites with MRI scans. Median age was 0.77 years and 57% were male. Most common MRI finding was ischemia, present in 57/81 subjects (70%), in a median of 7 brain regions per subject. Contusion 46/81 (57%) and diffuse axonal injury (DAI) 36/81 (44.4%) subjects followed. Children were dichotomized based on likelihood of AHT with 43/81 subjects classified as AHT. Ischemia was found to be significantly associated with AHT (p = 0.001) and “inflicted” injury mechanism (p = 0.0003). In conclusion, the most common intracerebral injury seen on MRI of infants with severe TBI was ischemia, followed by contusion and DAI. Ischemia was associated with AHT, and ischemia affecting &gt; 4 brain regions was predictive of AHT.

About the Lab: By identifying MRI biomarkers in animal models of pediatric brain injury, the Ferrazzano Research Group hopes to provide a means for selecting the patients most likely to benefit from a particular neuroprotective intervention in subsequent clinical trials. Basing patient selection on the physiologic target of therapy rather than simply the disease state will reduce the sample size needed, increase the likelihood of observing a drug effect, and facilitate the translation of promising neuroprotective interventions into clinical use. 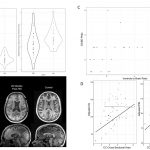 Adolescent traumatic brain injury (TBI) is a major public health concern, resulting in over 35,000 hospitalizations in the U.S. each year. While neuroimaging is a primary diagnostic tool in the clinical assessment of TBI, our understanding of how specific neuroimaging findings relate to outcome remains limited. Our study aims to identify imaging biomarkers of long-term neurocognitive outcome after severe adolescent TBI. 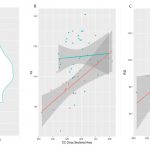 By identifying MRI biomarkers in animal models of pediatric brain injury, Waisman investigator Peter Ferrazzano hopes to provide a means for selecting the patients most likely to benefit from a particular neuroprotective intervention in subsequent clinical trials. 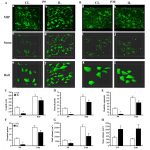 Neuroinflammation plays an important role in ischemic brain injury and recovery, however the interplay between brain development and the neuroinflammatory response is poorly understood. We previously described age-dependent differences in the microglial response and the effect of microglial inhibition.