MADISON – A multimillion-dollar planned estate gift from Dr. Richard Morse (’67 MD) of New Orleans, will fund an interdisciplinary society of graduate student scholars to study childhood mental health and developmental disabilities in the Waisman Center at the University of Wisconsin-Madison.

“This is a game-changing gift,” says Marsha Mailick Seltzer, director of the Waisman Center. “The Morse Fellows will be conducting interdisciplinary research, and these graduate students will come from a minimum of three academic departments.”

The Graduate School and the UW Foundation, under Vice President Walt Keough, played a large role in establishing the framework of the society and will be involved in shaping the direction and execution of the Morse Society and Fellowships. 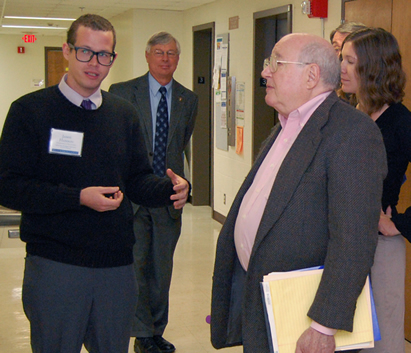 “Dr. Morse’s vision will have an impact on graduate research far into the future,” says Martin Cadwallader, dean of the Graduate School. “Bringing together scholars from various disciplines and vantage points will spark new avenues of inquiry and could pay great dividends to society.”

Morse, a professor of psychiatry in the South, looked at institutions across the country who could execute his vision. UW-Madison, with the Waisman Center and Graduate School so involved with interdisciplinary studies, fit the bill. The fact that his parents, Herbert (’25 LLB Law) and Freda Belle Morse (’26 BPH L&S), were both Badgers also played into his decision.

“I discussed it with my parents before they passed away in ’90 and ’95,” Morse says. “We had to find the right location. It really had to be somewhere that had a child center on campus. Doing it at the UW state university is infinitely more feasible than doing it at a private one.

“The Waisman Center has a mental-social track in developmental disabilities,” he adds. “The main work will be advanced doctoral and post-doctoral studies in developmental psychopathology, public health and preventive medicine. We call it childhood mental illness and mental health or well-being.”

The candidates have to be interdisciplinary and advanced: doctoral students, with perhaps a few post-docs, Morse says.

“The primary emphasis had to be mental health as it’s understood by psychology and psychiatry, with secondary extension to the mental and social developmental problems. The two fields overlap,” he adds.

Seltzer says the “society” is more than just a title.

“The really innovative and attractive component, in addition to the financial support, is the fact that these graduate students will get together on a biweekly basis for dinner, discussion and scientific discourse,” she says. “The gift will support these dinners, and the trainees will learn together and from each other,” as well as offering presentations to the outside scholarly community.

Each graduate student will have a chance to present his or her research on an ongoing basis to others with similar general interests focusing on childhood developmental disabilities and psychopathology from the point of view of multiple disciplines and academic departments.

“It’s a unique and creative idea,” Seltzer says. “When Dr. Morse visited here last September, I asked a group of graduate students of the type who might be Morse Scholars to visit with him. I left the room, figuring they might have a better conversation without me monitoring it, and I heard from the students afterward how inspired they were by this idea and how much they would love to be part of such a society where they would co-mentor each other.”

Seltzer says the Morse Society and Fellowships also could open new connections for the Waisman Center, which already is one of the largest interdisciplinary programs on campus, with more than 50 affiliates from 27 different departments in multiple schools and colleges.

“For instance, we don’t have an ongoing set of faculty affiliates in the Law School, but Dr. Morse has pointed out there are legal scholars who are concerned with the same sorts of difficulties children and families face that we are, and there’s no reason why we couldn’t have a strong connection with the Law School or public policy,” she says.

The gift comes as the Waisman Center prepares to mark its 40th anniversary in 2013.

Morse, who earned his undergraduate degree in Classics at Harvard University and later served in the military Special Forces, has been a national leader in the field of Pain Medicine in addition to his work in child and adolescent psychiatry. He was a founding director of the American Academy of Pain Medicine.

The estate gift establishing the Morse Society and Fellowships honors and contains the estates of not only Morse’s parents but also his partner, Larry Connor. “He’s a psychiatric social worker, and he has worked with me both clinically and with investing,” Morse says. “We worked together in the pain treatment specialty for 32 years.”

Of his parents, Morse says: “They lived in Milwaukee, and they were still going to football games in their 70s and following the Badgers into their 80s. And, of course, Dad was an attorney, and he had frequent connections with the courts in Madison. At home, he was on the board of the vocational services, did a lot of labor law and was concerned about people finishing high school having literacy and vocational skills.

“My mother was a social worker and was very involved with a summer camp,” he says. “She had the brilliant idea of putting it under the Community Chest (the precursor to the United Way), half with rich kids and half with indigent kids. I worked as a counselor there, and that was my first exposure to indigent and disturbed kids.”

Morse hopes his gift and the scholarship it inspires will help children far into the future.

“I have found that the best work is interdisciplinary, when we put together the basic sciences, clinical practice plus public policy,” he says. “The people getting the shortest end of the stick and paying the greatest price in society right now are children with mental illness and developmental challenges. We can do better.”