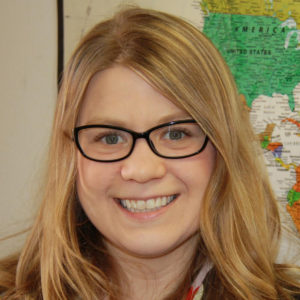 Subtle interactions that demonstrate power, both verbal and nonverbal, take place in a child’s environment every day, and one UW researcher wants to know if children are actually paying attention. Through scripted scenarios geared to depict social hierarchy, assistant professor and Waisman Center investigator Kristin Shutts explored how children are sensitive to their social environment and how they interpret social interactions.

In the February issue of Child Development, Shutts investigates whether young children are able to identify relative power—the amount of power one person has in relation to another person—in social settings in order to predict behavior and determine abilities. Titled “Children Use Nonverbal Cues to Make Inferences About Social Power,” Shutts and co-author Libbie Brey, a UW-Madison graduate student, reveal that children ages three and four have more difficulty identifying relative power in nonverbal interactions than five- and six-year-olds. This study is part of Shutts’ long-term, multi-faceted research on how children discern social differences within their community.

“Relative power cues are a ubiquitous part of human society. They’re useful for making predictions for what people will do next, who has resources, and who can help you. They’re also useful for forecasting people’s behavior,” says Shutts.

This study was part of a three-year Living Laboratory project supported by a grant from the National Science Foundation. The Living Laboratory is designed to gather data and assist researchers and informal science educators to engage the general public and understand the study of early childhood development while simultaneously advancing research.

The National Living Lab initiative was piloted at Harvard University and the Museum of Science Boston. Other universities and science museums across the country have followed suit but Shutts’ study is unique in that it takes place in a children’s museum setting. Shutts’ “living lab” is at the Madison Children’s Museum in addition to her lab at the Waisman Center. Research assistants observe young children at the museum and then approach their parents to explain the study and gauge interest in participation. “We want to understand what children learn from observing interactions between others when they receive no direct information about either person and can only use body language to learn about them,” says Brey.

One hundred ninety-two children ages three to six and their parents/caregivers were taken to a designated space in the museum’s exhibit area for participation. Children watched 20-second video segments or viewed photographs of amateur actors portraying relative power situations such as using a loud voice versus a passive voice and direct gaze compared to averted gaze. Based on body language and relevant dialogue, children were asked to identify “who’s in charge?” or “who’s the boss?” “We wanted to know if young children are sensitive to the cues that adults use with their bodies,” says Shutts. Each trial—including instructions, viewing and response—lasted approximately three minutes.

Visitor participation in research at the Madison Children’s Museum focuses on sharing the scientific process and increasing research awareness. In addition to scientists gaining participants and a lab setting, museum educators gain direct access to current child development research and its potential application to their work with early childhood development.

“The impact of this study is two-fold. Museum visitors who were unaware of research opportunities on campus have a chance to view scientific research through a new lens,” says Shutts. “It was also a beneficial experience for undergraduate and graduate students to communicate the importance of their research to the public in a meaningful way.”

“The research collaboration has been greeted with enthusiasm by our visitors,” says Kia Karlen, director of education at the Madison Children’s Museum. “[We] also model an enthusiasm for lifelong learning, and appreciate the way in which Living Laboratory collaborations make it visible to our audience that our staff and volunteers are learning on the job as they work with researchers.”

Setting up a lab in the Madison Children’s Museum allows Shutts’ team to obtain more participants in a shorter period of time than if they pursue traditional recruitment methods. “Most parents are curious about what their child knows about body language, and what they learn by observing interactions between two strangers so they’re eager to have their children participate, sometimes more eager than their children,” says Brey. For Shutts, the museum setting provides a natural backdrop to study the social development of children rather than a conventional lab space in an academic building. “When children try to figure out aspects of their social world, they look to their surroundings as models.”

Eventually, the National Living Laboratory initiative hopes to provide on-site research as an expected part of the museum visitor experience to advance the study of child development and disseminate information and resources about the model to other museums and academic institutions nation-wide.

Shutts is continuing her work at the Madison Children’s Museum and UW researchers Jenny Saffran and Chuck Kalish have recently begun conducting research there as well. “The Children’s Museum has been a fantastic partner for us in the last few years. Our hope is that we can continue to have positive experiences with families there in the years to come,” says Shutts.