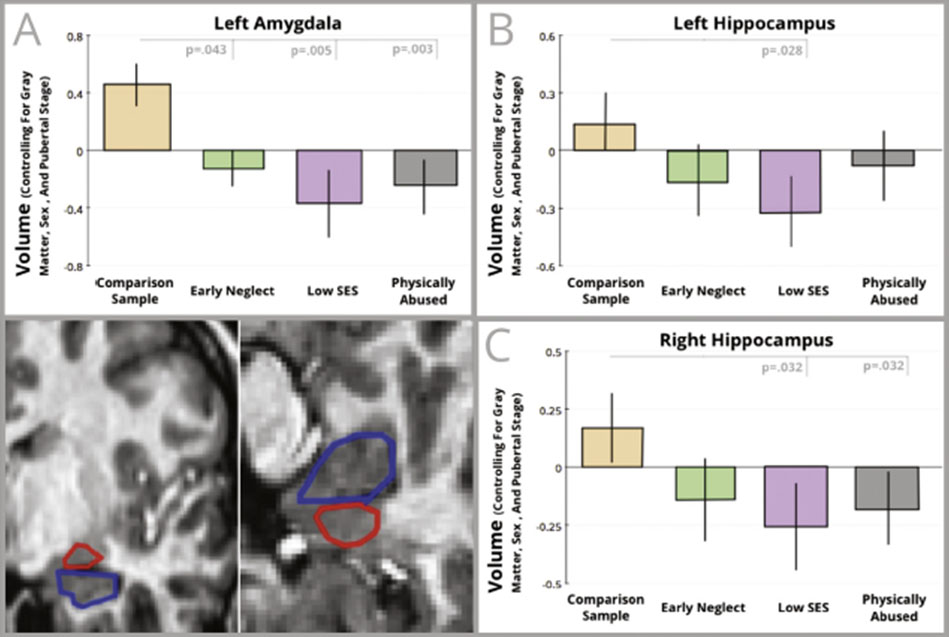 Title: Amygdala and hippocampal volume is reduced in children exposed to different forms of adversity

Legend: Volumetric comparisons for the left amygdala (A) and left (B) and right (C) hippocampus. For each graph, standardized residuals controlling for total gray matter, pubertal stage, and sex are shown on the vertical axis, and group is shown on the horizontal axis. Example hand-tracings of the amygdala (outlined in red) and hippocampus (outlined in blue) are in the bottom left corner of the figure. SES, socioeconomic status.

Abstract: Early life stress (ELS) can compromise development, with higher amounts of adversity linked to behavioral problems. To understand this linkage, a growing body of research has examined two brain regions involved with socioemotional functioning-amygdala and hippocampus. Yet empirical studies have reported increases, decreases, and no differences within human and nonhuman animal samples exposed to different forms of ELS. This divergence in findings may stem from methodological factors, nonlinear effects of ELS, or both. We completed rigorous hand-tracing of the amygdala and hippocampus in three samples of children who experienced different forms of ELS (i.e., physical abuse, early neglect, or low socioeconomic status). Interviews were also conducted with children and their parents or guardians to collect data about cumulative life stress. The same data were also collected in a fourth sample of comparison children who had not experienced any of these forms of ELS. Smaller amygdala volumes were found for children exposed to these different forms of ELS. Smaller hippocampal volumes were also noted for children who were physically abused or from low socioeconomic status households. Smaller amygdala and hippocampal volumes were also associated with greater cumulative stress exposure and behavioral problems. Hippocampal volumes partially mediated the relationship between ELS and greater behavioral problems. This study suggests ELS may shape the development of brain areas involved with emotion processing and regulation in similar ways. Differences in the amygdala and hippocampus may be a shared diathesis for later negative outcomes related to ELS.

About the investigator:  Research in Davidson’s laboratory is focused on the neural bases of disordered and healthy emotion and emotional style and methods to promote human flourishing including meditation and related contemplative practices.   His studies have included persons of all ages from birth though old age and have also included individuals with disorders of emotion such as mood and anxiety disorders and autism, as well as expert meditation practitioners with tens of thousands of hours of experience.  His research uses a wide range of methods including different varieties of MRI, positron emission tomography, electroencephalography and modern genetic and epigenetic methods.