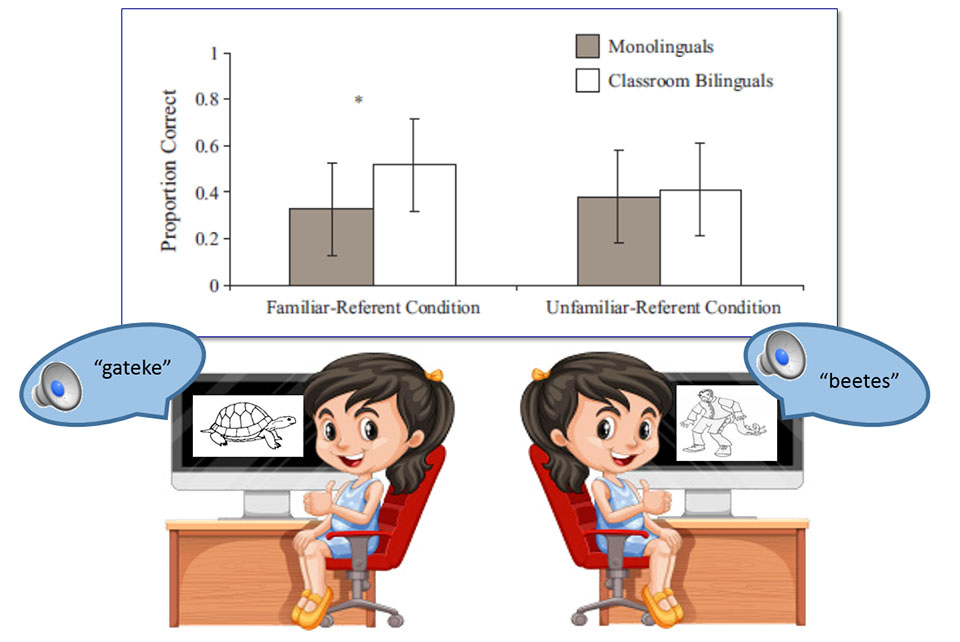 Legend: Children who experienced two years of Spanish exposure in a dual-immersion classroom outperformed monolingual children when learning new made-up words (e.g., “gateke”). This was especially true when they learned new words for objects they were familiar with (e.g., turtle).

Abstract: We examined the effects of classroom bilingual experience in children on an array of cognitive skills. Monolingual English-speaking children were compared with children who spoke English as the native language and who had been exposed to Spanish in the context of dual-immersion schooling for an average of 2 years. The groups were compared on a measure of non-linguistic task-shifting; measures of verbal short-term and working memory; and measures of word-learning. The two groups of children did not differ on measures of non-linguistic task-shifting and verbal short-term memory. However, the classroom-exposure bilingual group outperformed the monolingual group on the measure of verbal working memory and a measure of word-learning. Together, these findings indicate that while exposure to a second language in a classroom setting may not be sufficient to engender changes in cognitive control, it can facilitate verbal memory and verbal learning.

About the Investigator: Kaushanskaya’s research focuses on second-language acquisition and bilingualism in children and adults. The overall goal of her research program is to uncover the nature and the developmental trajectory of cognitive mechanisms that underlie language learning. Her work examines how monolingual and bilingual children and adults learn words in a new language, and how bilinguals manage their two languages when they must speak or read in one language only. Currently, Kaushanskaya is exploring links between vocabulary learning and literacy in monolingual and bilingual children. Her research takes place in the Language Acquisition and Bilingualism Laboratory, housed in the Goodnight Hall and the Waisman Center.