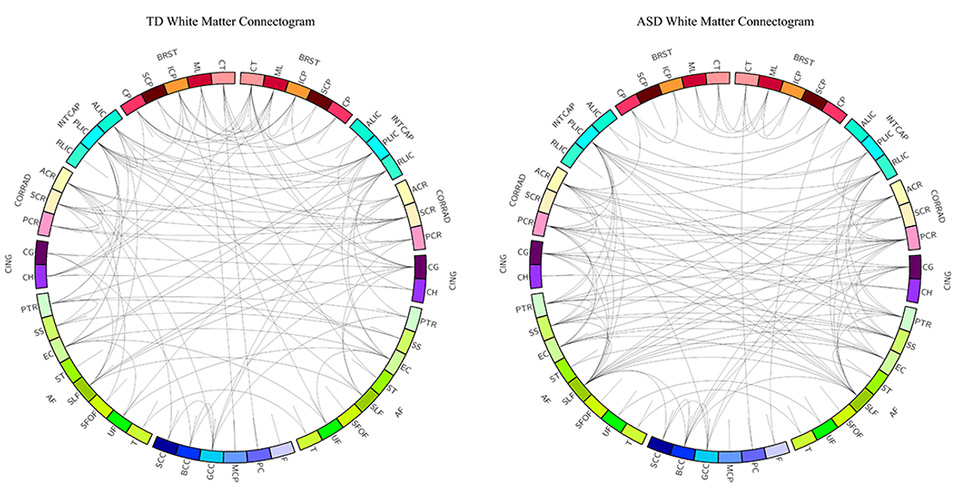 Legend: Graphical visualization (‘connectogram’) of brain white matter networks of the examined typically developing (TD) and autism spectrum disorder (ASD) groups. Individual white matter tracts were broadly grouped by region (outside labels), while the individual tract is indicated by the inside of the circle. Connectograms are symmetric about the center, with left hemisphere tracts on the left, and right hemisphere tracts on the right. The TD group had stronger inter-regional correlations amongst white matter regions, compared to the ASD group, suggesting that white matter microstructure in ASD may be less coherently organized.

Abstract: White matter microstructure supports a complex and dynamical system that is critical for efficient and synchronized brain function.  Neuroimaging findings in children with autism spectrum disorder (ASD) suggest this condition is associated with altered white matter microstructure, which may lead to atypical macroscale brain connectivity.  In the present study, we used diffusion tensor imaging measures to examine the extent that white matter tracts are interrelated within ASD and typical development. We assessed the strength of inter-regional white matter correlations between typically developing and ASD diagnosed individuals. Using hierarchical clustering analysis, patterns of the pairwise white matter correlations were constructed and revealed to be different between the two groups. Additionally, we explored the use of graph theory analysis to examine the characteristics of the patterns formed by inter-regional white matter correlations and compared these properties between ASD and typical development.  We demonstrate that the ASD sample has significantly less coherence in white matter microstructure across the brain compared to that in the typical development sample. The ASD group also presented altered topological characteristics, which may implicate less efficient brain networking in ASD. These findings highlight the potential of correlational network characteristics to describe the heterogeneity of microstructure as measured by diffusion MRI and further indicates that ASD may be associated with altered brain network characteristics. Our findings are consistent with those of a growing number of studies and hypotheses that have suggested dysregulated brain development in ASD.

About the lab: Alexander’s research focuses on the use of magnetic resonance imaging (MRI) for mapping and measuring the functional and structural organization of the human brain. These techniques are used to investigate the brain in both typically developing individuals and subjects with developmental disorders including autism. Functional MRI (fMRI) is used to assess brain regions associated with cognition and affect and their dysfunctions in these populations. Diffusion tensor MRI (DT-MRI) is used to study the patterns of structural connectivity between brain activity regions. Anatomic imaging methods are used to assess longitudinal structural changes in brain regions. These measurements are ultimately compared with measures of affect, behavior and cognition in specific population groups.