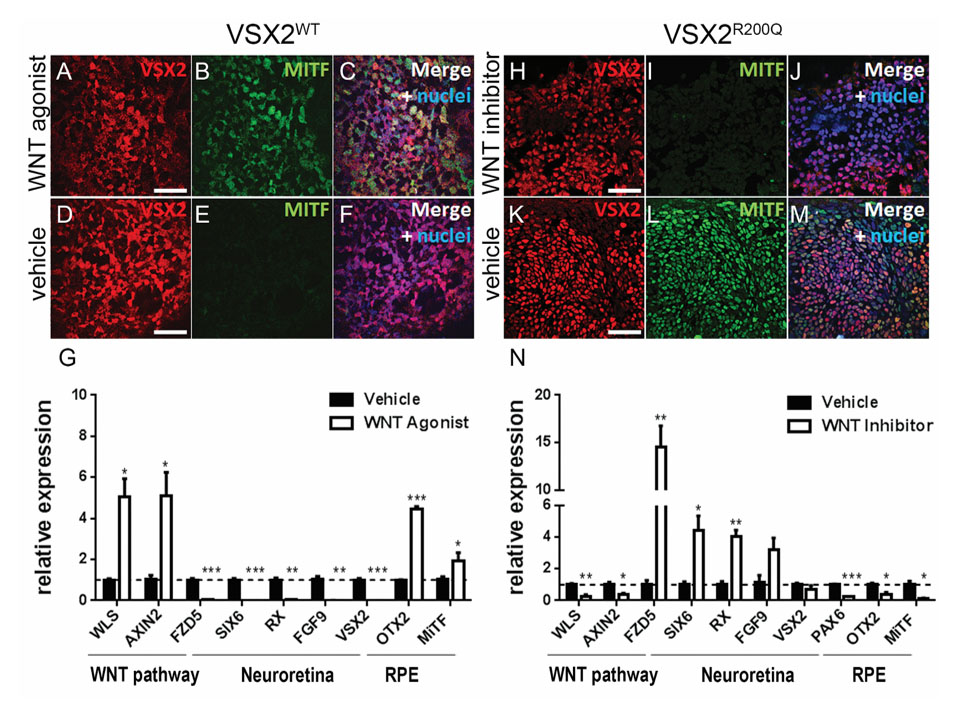 Abstract: Few gene targets of Visual System Homeobox 2 (VSX2) have been identified despite its broad and critical role in the maintenance of neural retina (NR) fate during early retinogenesis. We performed VSX2 ChIP-seq and ChIP-PCR assays on early stage optic vesicle-like structures (OVs) derived from human iPS cells (hiPSCs), which highlighted WNT pathway genes as direct regulatory targets of VSX2. Examination of early NR patterning in hiPSC-OVs from a patient with a functional null mutation in VSX2 revealed mis-expression and upregulation of WNT pathway components and retinal pigmented epithelium (RPE) markers in comparison to control hiPSC-OVs. Furthermore, pharmacological inhibition of WNT signaling rescued the early mutant phenotype, whereas augmentation of WNT signaling in control hiPSC-OVs phenocopied the mutant. These findings reveal an important role for VSX2 as a regulator of WNT signaling and suggest that VSX2 may act to maintain NR identity at the expense of RPE in part by direct repression of WNT pathway constituents.

About the Lab: Gamm’s laboratory at the Waisman Center utilizes stem cell technology to investigate the cellular and molecular events that occur during human retinal differentiation and generate cells for use in human retinal disease modeling and cell-based rescue or replacement strategies. To meet these goals, Gamm utilizes a variety of human cell types, including ES and iPS cells, which have the capacity to mimic retinal development and disease, as well as to delineate the genetic “checkpoints” necessary to produce particular retinal cell types. By understanding the behavior of these cell types in vitro and in vivo, Gamm hopes to optimize strategies to delay or reverse the effects of blinding disorders such as retinitis pigmentosa and age–related macular degeneration.