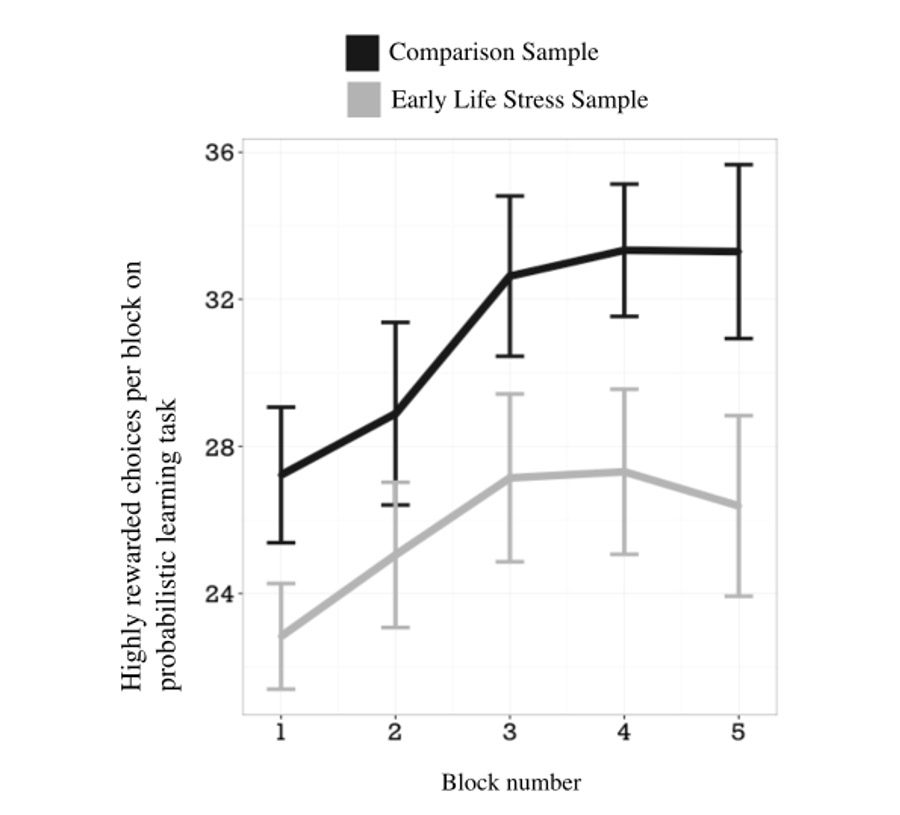 Legend: Associative learning performance over the course of the experiment. Total number of choices of highly rewarded stimuli (our measure of associative learning) is shown on the vertical axis, and each successive block of the experiment is depicted on the horizontal axis. Individuals who had suffered early life stress are displayed as light gray; participants in the comparison sample are shown in black. Children who experienced high levels of early life stress had difficulty learning that some stimuli were paired with rewards.

Abstract: Background – Children who experience early adversity often develop emotion regulatory problems, but little is known about the mechanisms that mediate this relation. We tested whether general associative learning processes contribute to associations between adversity, in the form of child maltreatment, and negative behavioral outcomes. Methods – Eighty-one participants between 12 and 17 years of age were recruited for this study and completed a probabilistic learning task. Forty-one of these participants had been exposed to physical abuse, a form of early adversity. Forty additional participants without any known history of maltreatment served as a comparison group. All participants (and their parents) also completed portions of the Youth Life Stress Interview to understand adolescents’ behavior. We calculated measures of associative learning, and also constructed mathematical models of learning. Results – We found that adolescents exposed to high levels of adversity early in their lives had lower levels of associative learning than comparison adolescents. In addition, we found that impaired associative learning partially explained the higher levels of behavioral problems among youth who suffered early adversity. Using mathematical models, we also found that two components of learning were specifically affected in children exposed to adversity: choice variability and biases in their beliefs about the likelihood of rewards in the environment. Conclusions – Participants who had been exposed to early adversity were less able than their peers to correctly learn which stimuli were likely to result in reward, even after repeated feedback. These individuals also used information about known rewards in their environments less often. In addition, individuals exposed to adversity made decisions early in the learning process as if rewards were less consistent and occurred more at random. These data suggest one mechanism through which early life experience shapes behavioral development.

About the Lab: Research projects in the Child Emotion Laboratory are focused upon children’s emotional development and the relationship between early emotional experience and child psychopathology.