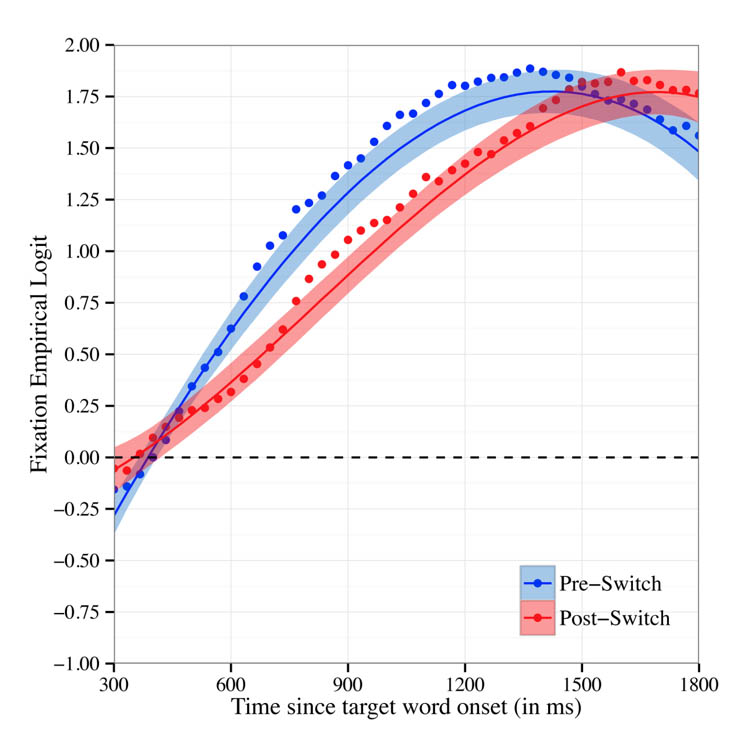 Legend: Results of a study in which 3-year-olds viewed pairs of familiar objects and heard them labeled by either their names (“Look at the bucket!”) or their colors (“Look at the brown one!”). Halfway through the study, the labeling dimension was switched (from names to colors or vice-versa). Children were faster and more accurate at fixating the correct object prior to the switch in labeling dimensions.

Abstract: Language is used to identify objects in many different ways. For example, an apple can be identified using its name, color, and other attributes. Skilled language comprehension requires listeners to flexibly shift between different dimensions. We asked whether this shifting would be difficult for 3-year-olds, who have relatively immature executive function skills and struggle to switch between dimensions in card-sorting tasks. In the current experiment, children first heard a series of sentences identifying objects using a single dimension (either names or colors). In the second half of the experiment, the labeling dimension was switched. Children were significantly less accurate in fixating the correct object following the dimensional switch. This disruption, however, was temporary; recognition accuracy recovered with increased exposure to the new labeling dimension. These findings provide the first evidence that children’s difficulty in shifting between dimensions impacts their ability to comprehend speech. This limitation may affect children’s ability to form rich, multi-dimensional representations when learning new words.

About the Lab: In the Infant Learning Lab, we study how infants discover the structure of their environment, especially language.