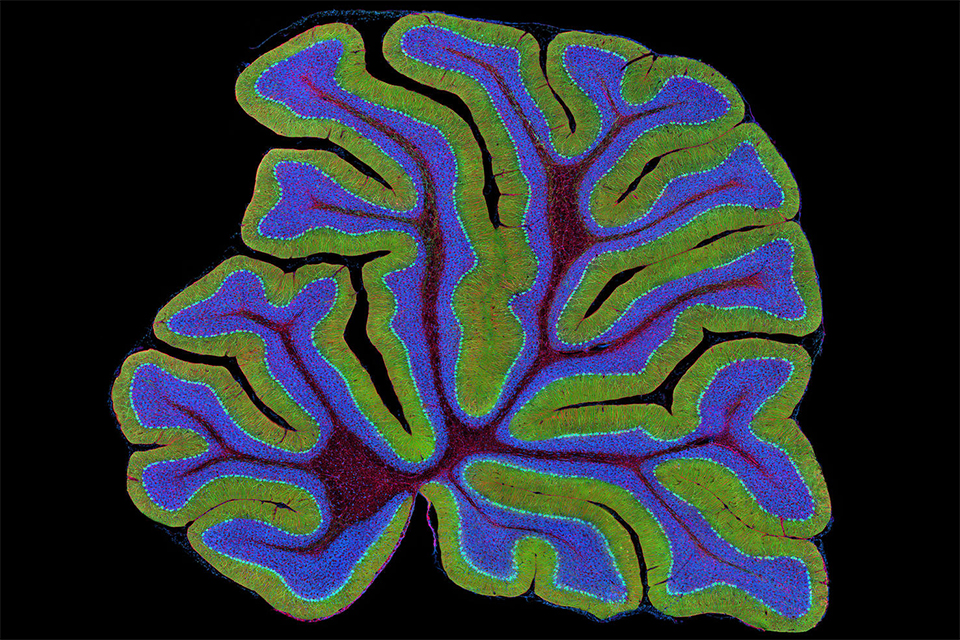 Pick a word. Any word.

To be able to speak aloud the word you picked needs exquisite coordination between several parts of the body. The brain, lungs, throat, voice box, tongue and lips must work together to make sure we are saying what we intend to communicate.

How do we do it? Researchers have long thought that a specific part of our brain – the cerebellum – plays a key role in the muscle control we need to speak.

What they don’t know is how the cerebellum influences our speech.

“We know that when the cerebellum is damaged, it causes movement disorders in both speech and non-speech actions,” says UW–Madison Waisman Center investigator Ben Parrell. “What we don’t understand is why cerebellar damage leads to these disorders.”

So Parrell, who is a new assistant professor of communication sciences and disorders at UW-Madison, set out to investigate.

In a recent study, he and his colleagues discovered that damage to the cerebellum diminishes our ability to predict consequences of an action and issue specific motor commands to the body – what researchers call “feedforward control.”

“If you can correctly predict what will happen after an action – like trying to say a specific word, for example – you can do things more fluidly, more rapidly because you don’t need to monitor outcomes in real time,” says Parrell.

In contrast, without properly functioning feedforward control, we have to instead exercise “feedback control,” which is reactive rather than predictive and it takes more time. “You do things a little bit at a time, monitor what happened, then do a little bit more and monitor again, and so on,” says Parrell.

Imagine trying to carry out a conversation while having to slow down and make sure that each word is being pronounced correctly.

“For the human nervous system, monitoring outcomes and correcting for them takes between 50-200 milliseconds,” says Parrell. Many actions, including speaking, happen in a much shorter time span. “So the idea is that we can’t rely only on the feedback – or reactive – system to produce these actions because it will be just too slow.”

Parrell, who conducted the bulk of the study during his time as a postdoc at the University of California, Berkley, tested both the predictive (feedforward) and reactive (feedback) systems in individuals with and without damage to the cerebellum.

Study participants were asked to read specific words, such as “head,” into a microphone. Their voices were recorded, run through a computer program and played back through headphones. This entire process took 12 milliseconds – an imperceptible nugget of time.

When their voices were played back through headphones, the study participants didn’t always hear what they expected. The researchers subtly changed the words they spoke – “head” would sound more like “hid,” for example.

In tests for predictive control, the researchers introduced these changes over multiple trials. It was up to the participants to compensate, changing how they subsequently pronounced the intended word to get it closer to sounding like “head.” For instance, in the next trial, the speaker might say something that sounded more like “had.”

How well participants were able to do this depended greatly on whether they had experienced cerebellar damage.

“We wanted to ask if people with cerebellar damage could adjust their behavior to incorporate this consequence of their action over time,” says Parrell, noting that individuals with cerebellar damage could adjust their behavior, but not to the same degree as those without any damage. “We take that as evidence that their ability to change their predictive control system is impaired, which indicates that the cerebellum is critical for this process.”

But the tests for reactive control said something else entirely.

That meant the study subjects had to depend on their reactive system. “We found that the folks with cerebellar damage responded to these unpredictable changes to a larger extent than those without any damage,” says Parrell. “It was totally unexpected.”

Parrell’s research shows that the cerebellum plays a vital role in our predictive systems, which in turn greatly affects how we speak and communicate. He is now exploring why those with cerebellar damage have improved reactive systems and what that means for their ability to speak the words they want to use.

The story first appeared on the UW MadScience Blog.