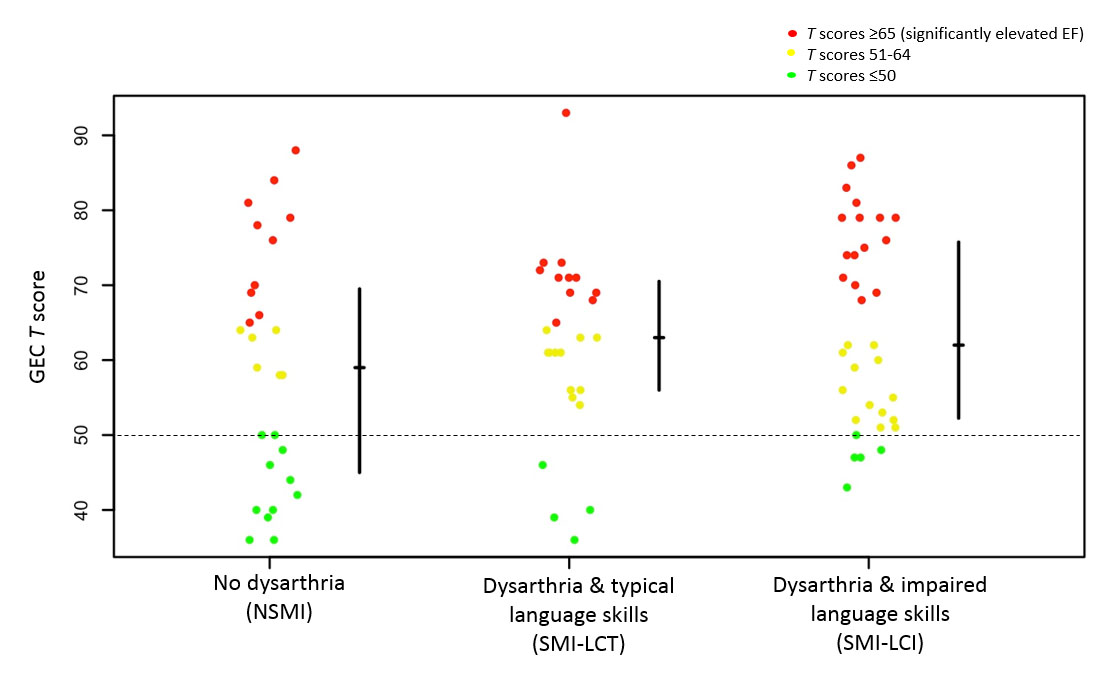 Legend: The plot shows the distribution of T scores by clinical speech language profile group on the Global Executive Composite (GEC) measure from the Behavior Rating Inventory of Executive Function (BRIEF). Points are observed T values, jittered horizontally to avoid overlap. Bars run from the 1st to the 3rd quartile with hashmarks indicating the median. Dashed line is mean of 50. When compared to a mean of 50 from a normative population of children, the mean T score on the GEC measure was significantly higher than 50 for all speech language profile groups. No significant differences were found among clinical profile groups on mean GEC T scores.

Abstract: Background and Aims: Although children with cerebral palsy (CP) are at an increased risk for developing speech, language, and executive function (EF) impairments, little is known regarding the relationship among these risk factors. The current study examined how different profiles of speech and language impairment might be associated with impairments in EF skills in school-aged children with CP. Methods and Procedures: Forty-seven school-aged children with CP were included in the current study. Each child contributed between one and four data points for a total of 87 data points. Children were classified into one of three speech and language profile groups at each data point. EF skills were examined using BRIEF, a standardized caregiver rating scale. Outcomes and Results: Elevated scores of executive dysfunction and higher proportions of clinically significant executive dysfunction were found for all profile groups when compared to a normal population of children. Conclusions and Implications: Results suggest that children with CP who do not have impairments in speech or language may be at risk for EF difficulties, which may negatively affect social communication, academic performance, and functional independence.

About the Lab: The Hustad laboratory is dedicated to the study of communication development in children with CP, which is the most common cause of severe motor disability in children. It affects 25 per 10,000 people in the US. Although motor impairment is the primary defining feature of CP, other issues such as intellectual disabilities, seizure disorder, and learning disabilities often co-occur. In the past, studies have suggested that up to 60% of children with CP may have communication problems, but research in Hustad’s laboratory has revealed that this figure may be considerably higher (up to 75%). Prior to this work, however, the exact nature of communication problems in children with CP had never been comprehensively examined. As a result, little is known about the nature of speech, language, and cognitive problems and their co-occurrence with gross motor, and fine motor problems. One result is that data-based prognoses for communication development are unknown, and many children who have CP do not receive appropriate speech and language intervention until they enter preschool, missing critical early intervention opportunities.