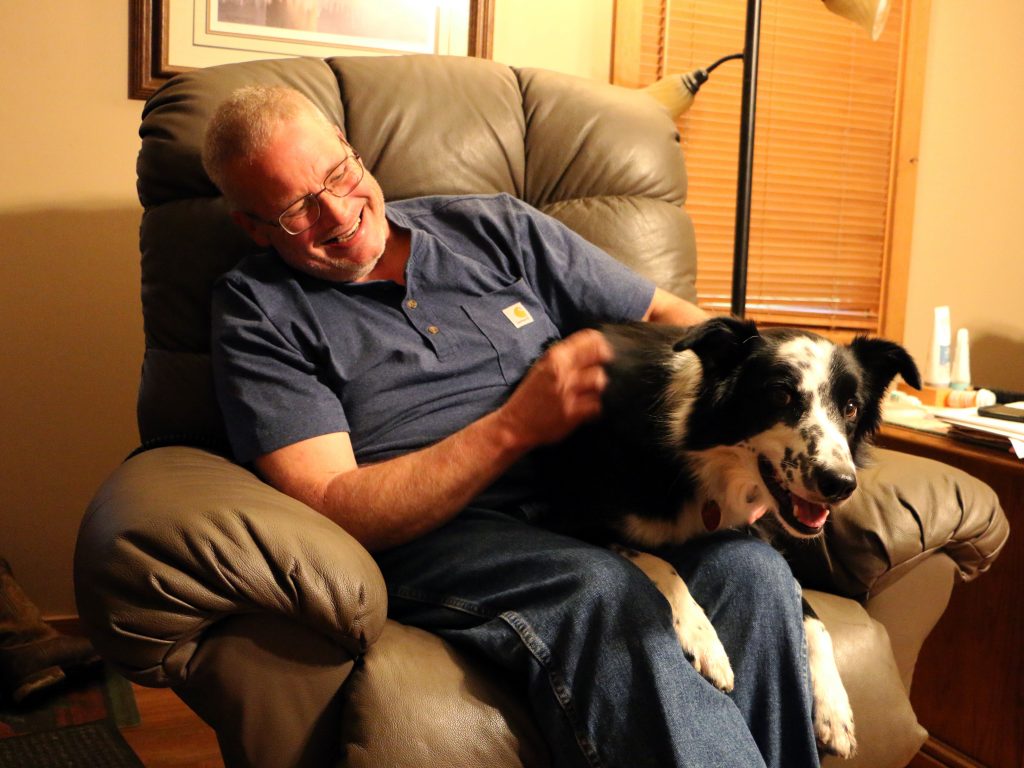 If you ask David Seamans what his favorite thing to do is, he’ll pause thoughtfully for a moment before responding, “Everything.”

He really does mean everything. In May of this year, he traveled with his brother to Saipan to aid in hurricane relief. He spent two weeks in over 100-degree weather replacing roofs. “It was the coolest thing I’ve ever been involved with other than getting married and watching my two daughters be born,” he says. “The way the people reacted was just absolutely incredible.”

This experience wouldn’t have been possible for Seamans just over a year ago; he had what was, at the time, an undiagnosed and progressively debilitating and blinding disorder that would have prevented it. One test later and Seamans’ life has completely changed. Today, he has regained his strength and his health and is only too happy to give back. “I got my miracle,” he says. “Let’s go hand it on and help somebody else out.”

About 10 years ago, Seamans began having unexplained neurological symptoms.

It began with his vision. Once an avid reader, he began struggling to see the words on the page: “I would read for 10-15 minutes and I couldn’t focus on anything.”

Soon after, he developed neuropathy in his limbs. “My hands and feet were going numb all the time,” he says. “I couldn’t walk 20 feet without canes or a walker. I was dragging my feet, I was dropping stuff all the time and I couldn’t see squat.”

Seamans was in regular consultation with multiple specialists, but they couldn’t determine the cause for his worsening condition. It was suspected that his symptoms were possibly the onset of multiple sclerosis (MS). However, his results came back negative when he was tested for the disease.

As his eyesight diminished and the physical challenges of daily life increased, Seamans’ world was becoming smaller and smaller. He was no longer able to drive. “I figured I was a goner. Everything was breaking down so bad,” he says. Not knowing what was causing his progression was especially hard. “To say it was depressing would be an understatement. I wanted to know. If I know why I’m blind, I can accept that.”

In a fortuitous turn of events, Seamans’ primary care doctor was discussing his case with a colleague who suggested a genetic consult. He was eventually referred to the Waisman Center Medical Genetics Clinic where he met with Elizabeth Kellom, MS, CGC, a genetic counselor.

The Waisman Center Medical Genetics Clinic is an interdisciplinary clinic for people who have suspected or known hereditary conditions. It is one of 10 specialty clinics at the center that serve individuals and families with a broad range of intellectual and developmental disabilities.  In the Medical Genetics Clinic, genetic counselors provide diagnostic and confirmatory services, care coordination, and counseling.

“We talked about all of the testing options,” Kellom says of her hour-long meeting with Seamans. “We talked about broad-based genetic testing to get a pretty good look at the vast majority of Mendelian disorders versus single gene tests for the most common genetic causes of optic atrophy,” says Kellom. Mendelian disorders are caused by a mutation in a single gene and include disorders such as cystic fibrosis, phenylketonuria (commonly referred to as PKU), and Rett syndrome.

Given the options, Seamans decided to undergo whole exome sequencing, which is a broad-based test. This method allows for sequencing the patient’s exome—the sections of an individual’s DNA that provide the core instructions for making proteins—and identifies variants in many genes at once. The cost for whole exome sequencing can be from $1,200 to $3,000 and is not covered by many insurance companies in Wisconsin. However for Seamans, it was a price he was willing to pay in the hope of finding some answers.  According to Kellom, “It ultimately turned out to be the correct thing to do.”

For the whole exome sequencing, Seamans performed a buccal swab in which his DNA was collected from the inside of his cheek. The swab was sent off to PerkinElmer Laboratories in Illinois to be analyzed. He spent the next five weeks, he says, “stressing and just hoping they found something.”

Seamans’ genetic test report showed several mutations in a gene called BTD. This gene provides instructions for biotinidase, an enzyme that recycles biotin—a B vitamin that is essential to properly functioning metabolism. “Without the recycled biotin,” Kellom explains, “you end up with biotinidase deficiency—a condition that would typically present in childhood with neurological features such as seizures, developmental delay, alopecia, dry skin, and hearing loss.”

After the genetic test, enzyme testing confirmed the diagnosis in David. Had he been born 25 years later, this would have been done at birth. Screening for biotinidase deficiency is currently done as part of the Wisconsin newborn screening panel, but it wasn’t included on the panel until 1991. “What we’re finding is that there’s a wide range of presentations of this particular condition and [Seamans] represents the extreme of that,” she says. “At 51, he is the oldest known person to develop symptoms of biotinidase deficiency.”

With Seamans’ condition confirmed, Kellom gave him a call. “She was like, ‘We found it!’” Seamans recalls. “‘And I hope you’re sitting down because it’s treatable!’”

Kellom told Seamans that the solution was simple enough: go to a local drug store and buy some biotin supplements. Seamans returned to the Waisman Center and met with Greg Rice, MD, a biochemical clinical geneticist in the Waisman Center Biochemical Genetics Clinic, to set up a treatment plan.

“It’s rare to find a condition that has a treatment as clear as what Dave received, but that doesn’t mean there isn’t value,” she says. “To even have some sort of a roadmap, for some families, is so beneficial to not have to wonder about the cause,” Kellom says. “I wish insurance companies valued that more. One day, I’m really hopeful that it will be consistent across insurance companies that this is a valuable test and that it’s cost effective.”

“Most people think of cutting firewood as a chore,” he says, “but that’s something I’ve always liked doing. I’ve always loved watching the stars at night, but it had gotten to where if I was lucky and I looked just right, I could only see one star at a time.”

Then on July 2, 2018, only two weeks after starting biotin supplements, he noticed a big change. “I went outside and looked up and saw the Big Dipper—the whole thing—and I cried,” he says.

While Seamans has made vast improvements in his health and vision, it is still a long and uncertain road to recovery. His vision remains slightly impaired and he continues to get physical therapy. He has regular follow-up appointments with his primary care doctor and ophthalmologist.

Seamans greatly appreciates the services he received at the Waisman Center Medical Genetics and Biochemical Genetics Clinics. The sentiment is mutual. “I’m really lucky to have met Dave and walked through this process with him. To see what he’s now able to see and to know that I played a role in that is incredibly rewarding,” Kellom says. “On those days that we have patients where we are still dealing with that unknown—which still happens even with whole exome sequencing—it helps to know you helped at least one person really reach that quality of life that he was missing. It doesn’t get better than helping somebody see.”

Seamans has advice for anyone who has symptoms similar to his or of unknown origin: “Get the test” he says of whole exome sequencing. “Best money I ever spent. I’m just hoping that what I’ve gone through can shed light on it so somebody else can get help.”