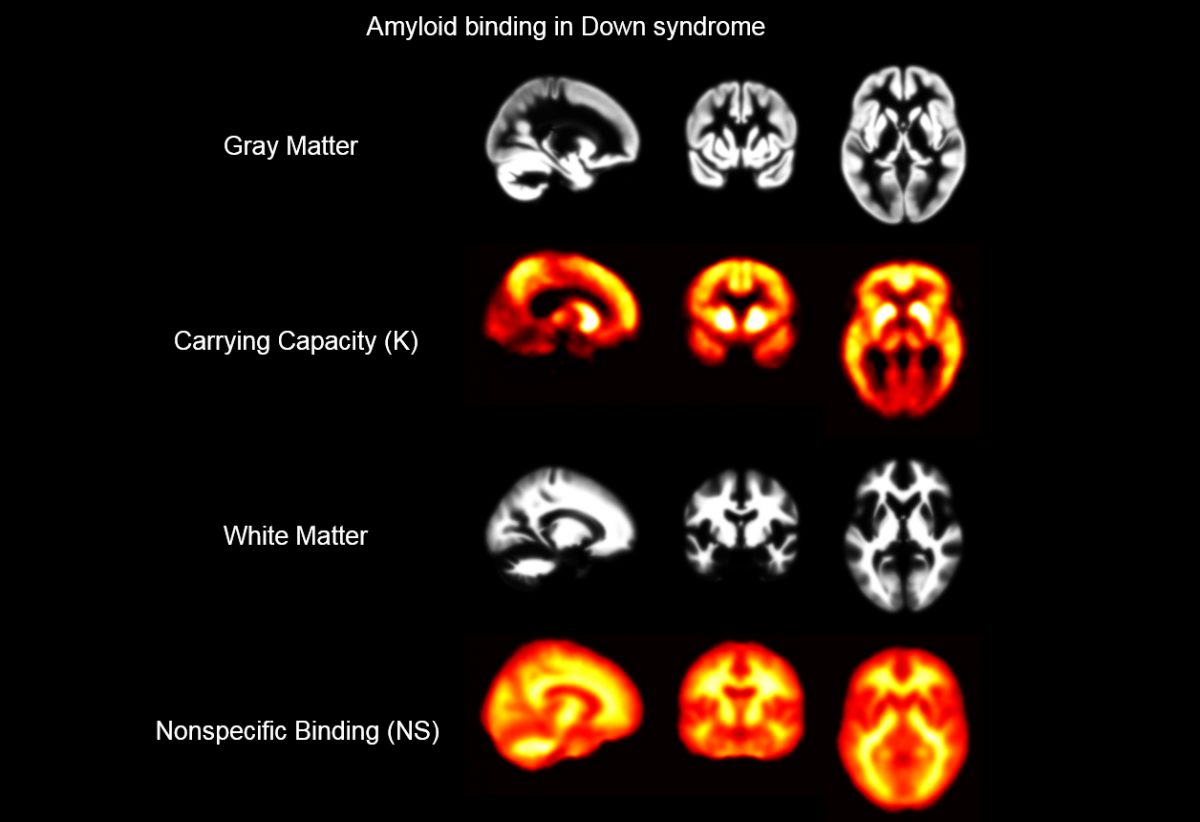 Title: Amyloid load in the Down syndrome population measured with [11C]PiB PET

Legend: Down syndrome-specific [11C]PiB PET template images of Aβ carrying capacity and radiotracer nonspecific binding derived from PET images of 169 individuals. Tissue maps of gray and white matter are displayed for a visual reference. The Aβ plaques are restricted to gray matter regions while the radiotracer nonspecific binding signal is confined to white matter. The image of carrying capacity is representative of the theoretical limit for the Down syndrome brain to carry Aβ, while highlighting the striatum as a region very susceptible to Aβ accumulation. Images courtesy of Matthew Zammit in the Christian lab.

Abstract: Individuals with Down syndrome (DS) are at increased risk of developing Alzheimer’s disease (AD) and show the earliest signs of amyloid-β (Aβ) deposition in the striatum. The metric for tracking Aβ burden using PET radiotracers frequently uses average standard uptake value ratios (SUVr) in signature regions of the brain specific to Aβ deposition. The accumulation of Aβ over the course of AD has been shown to follow a sigmoidal trajectory, which can be modeled by the logistic growth function. With a SUVr image, the logistic growth model can separate the Aβ-specific signal from nonspecific binding signal in the images. When the logistic growth model was fit at the voxel level to SUVr images of our DS cohort (N = 169), image templates of Aβ carrying capacity (K) and nonspecific binding (NS) were generated. The DS-specific maps for K and NS were consistent with the known Aβ pathology in DS and white matter [11C]PiB binding. The template image of K revealed the striatum as one of the regions with the highest capacity to carry Aβ.

About the Lab: Christian’s research focuses on the use of positron emission tomography (PET) to interrogate molecular pathways involved in various brain processes. [11C]PiB imaging is used to detect Aβ plaques in elderly participants with and without Alzheimer’s disease, as well as young adults with Down syndrome. A variety of radiolabelled tracers such as [18F]THK5351, [18F]nifene, [18F]mefway, [11C]PBR28, and [11C]clozapine are also used to understand tauopathies, addiction, and neuroinflammation.