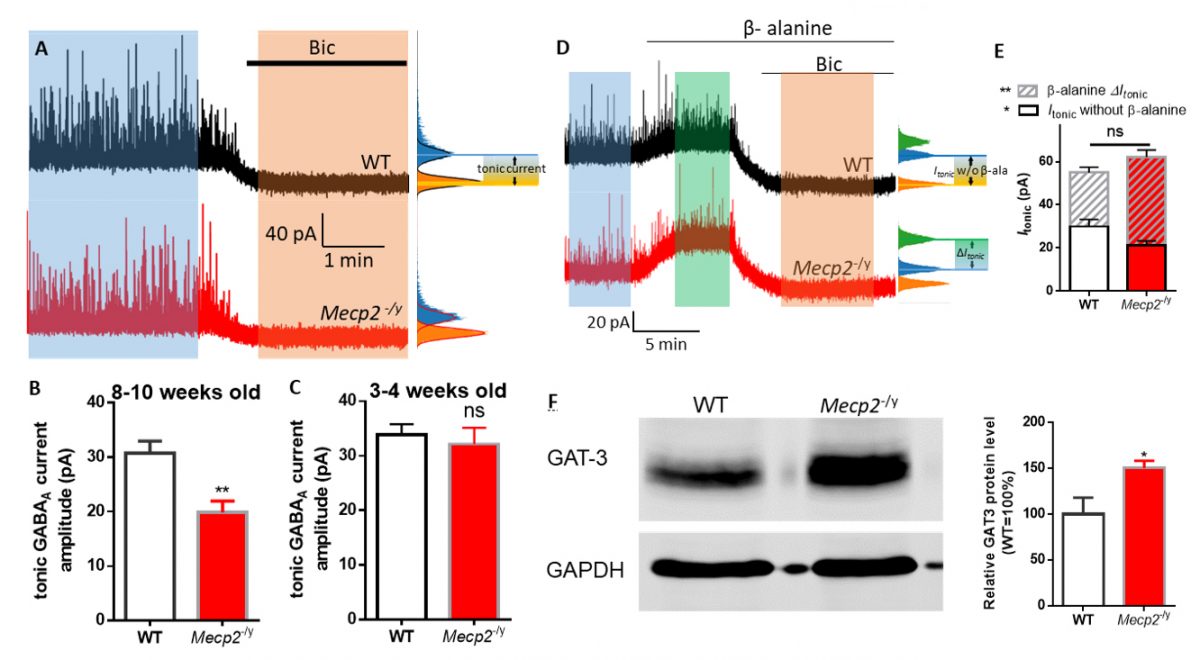 Legend: (A) Left: representative voltage-clamp recording showing spontaneous inhibitory synaptic currents (sIPSCs) in hippocampal CA1 pyramidal neurons recorded in acute brain slices obtained from wild type (WT, black trace) and Mecp2 KO (Mecp2-/y, red trace) mice. Bicuculline (Bic) blocks the sIPSCs and induces a shift of the holding currents from those recordings. Right: the tonic currents are measured by generating all-points histograms for the untreated (blue) and Bic (orange) epochs and then fitting Gaussian curves to the negative side of these histograms. The mean values from the Gaussian fits are then used to define the currents in the absence (blue) and presence (orange) of Bic. Scale bars: 1 min (x-axis), 40 pA (y-axis). (B, C) Quantification of amplitudes of tonic GABA currents (the difference between the currents in the absence and presence of Bic) from 8-10-week-old (B) and 3-4-week-old (C) WT and Mecp2 KO mice. (D) Quantification of tonic inhibition in acute hippocampal slices prepared from WT and Mecp2 KO mice in the presence of β-alanine, a selective GABA transporter 3 (GAT-3) blocker. *P<0.05, **P<0.01 vs WT. (E) Western blot result showing upregulation of hippocampal GAT-3 in Mecp2 KO mice.

Abstract: Rett syndrome (RTT) is a severe neurodevelopmental disease caused by mutations in the methyl-CpG binding protein 2 (MECP2) gene. Although altered interneuron development and function are clearly demonstrated in RTT mice, a particular mode of inhibition, tonic inhibition, has not been carefully examined. We report here that tonic inhibition is significantly reduced in pyramidal neurons in the CA1 region of the hippocampus in mice where Mecp2 is deleted in all cells or specifically in astrocytes. Since no change is detected in the level of GABA receptors, such a reduction in tonic inhibition is likely a result of decreased ambient GABA level. Consistent with this explanation, we observed increased expression of a GABA transporter, GAT-3, in the hippocampus of the Mecp2 knockout (KO) mice, as well as a corresponding increase of GAT-3 current in neighboring astrocytes. These phenotypes are relevant to RTT, because pharmacological blockage of GAT-3 can normalize tonic inhibition and intrinsic excitability in CA1 pyramidal neurons and rescue the phenotype of increase network excitability in acute hippocampal slices from the Mecp2 KO mice. Finally, chronical administration of a GAT-3 antagonist improved a composite symptom score and extended lifespan in the Mecp2 KO mice. These results not only advance our understanding of RTT etiology by defining a new neuronal phenotype and revealing how it can be influenced by astrocytic alterations, but also reveal potential targets for intervention.

About the Lab: The long-term goal of the Chang lab is to understand the molecular mechanism underlying DNA methylation-dependent epigenetic regulation of brain functions. His current focus is on the central role of MeCP2 (methyl-CpG binding protein 2), a molecular linker between DNA methylation and chromatin remodeling and transcriptional control, in the development and function of the nervous system. The functional significance of such a molecular linker is highlighted by the fact that mutations in the MECP2 gene cause Rett syndrome (RTT), a debilitating neurodevelopmental disorder that shares many features with autism. His studies include basic research aimed at understanding the function of MeCP2 and translational research aimed at understanding disease pathology and developing effective treatment. These two types of research are tightly interwoven—the need to solve a practical problem in translational research will always influence the direction of basic research; and fundamental mechanisms revealed by basic research will ultimately guide the effort in treating/curing the disease.