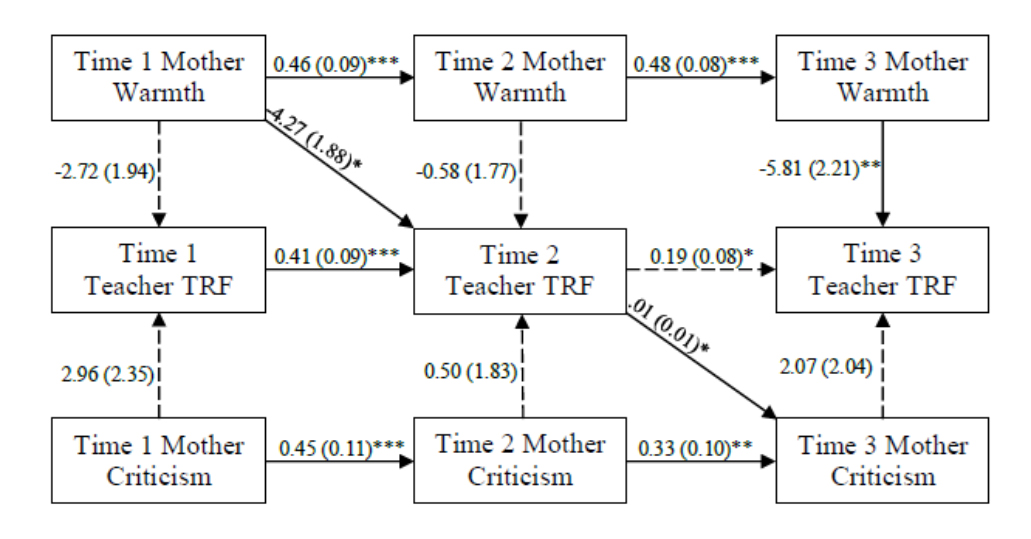 Title: Bidirectional Relations between Maternal Warmth and Criticism in a Five Minute Speech Sample and Emotional and Behavior Problems of Children with Autism

Abstract: Family research in the field of ASD has focused on describing the impact of child challenges on parents, usually mothers, and given little attention to the ways in which mothers and fathers reciprocally influence the development of the child with ASD. The current study examined the direction of effects between the emotional quality of the mother-child and father-child relationships and the child’s severity of ASD symptoms and emotional and behavioral problems across three time points spanning 2 years. Using parent Five Minute Speech Samples and teacher ratings of the severity of the child’s ASD symptoms and emotional and behavioral problems, four cross-lagged structural equation models were employed to test bidirectional effects between parent warmth and criticism and child ASD symptoms and emotional and behavioral problems across three waves of data (approximately 12 months apart) in 159 families who had a child with ASD (initially aged 6 to 13 years). Mothers and fathers had an average age of 39.53 (SD=5.55) and 41.66 years (SD=6.19). Children with ASD were predominately male (86.2%) and white, non-Hispanic (76.7%). Crossed-lagged model results indicated bidirectional effects for both mothers and fathers. Warmth in the mother-child relationship and father-child relationship impacted child functioning at earlier time points. In the opposite direction, child functioning impacted father warmth and mother criticism at later time points. Findings indicate that the emotional quality of the parent-child relationships are bidirectionally related to the symptoms and emotional and behavioral problems of children with ASD. Important implications for supporting families are discussed.

About the Lab: Sigan Hartley, PhD is an Associate Professor in the Human Development and Family Studies Department. Her research examines the individual resources and family contexts underlying positive well-being in individuals with developmental disabilities and their families.