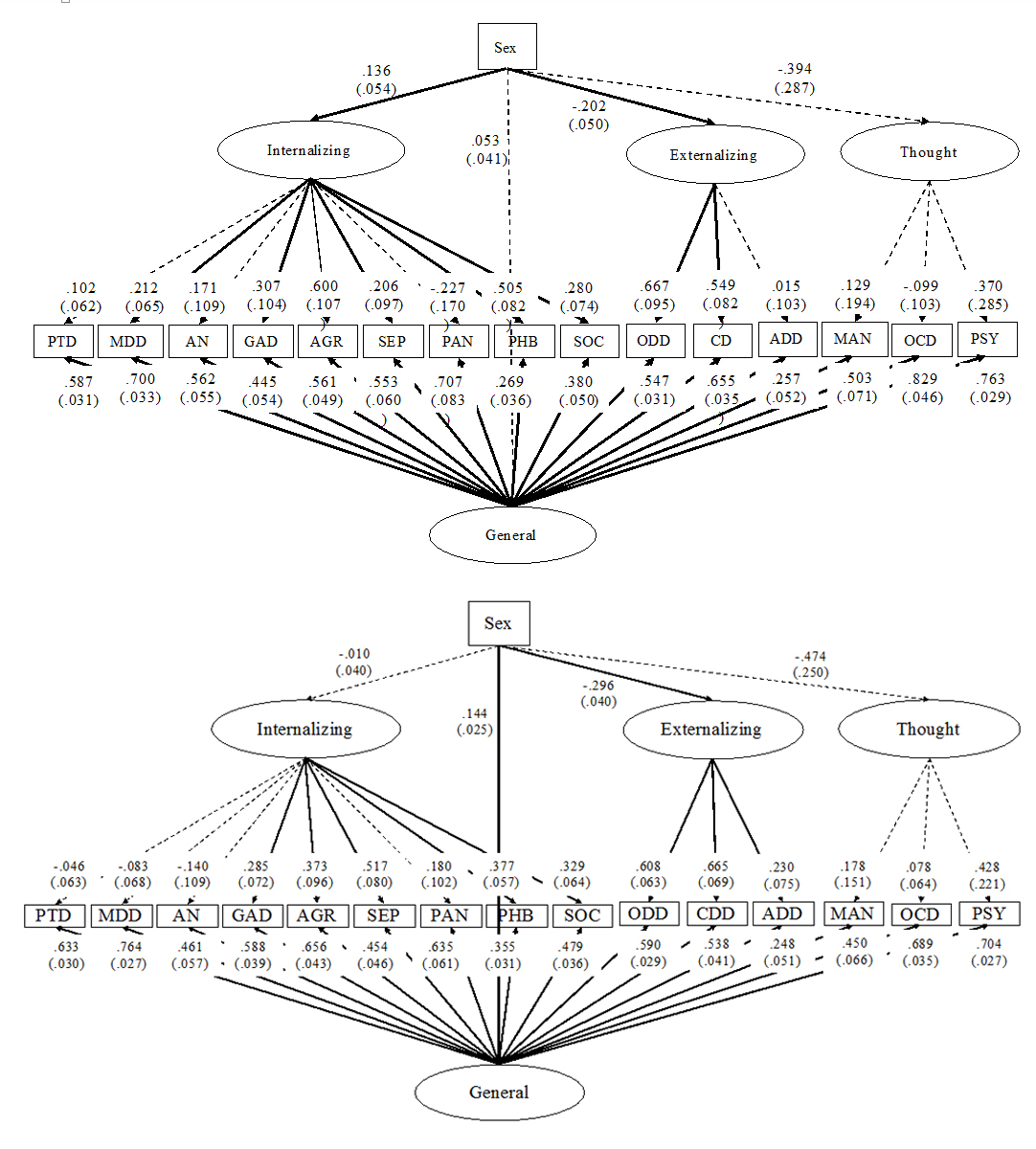 Abstract: Background: There is converging evidence that mental disorders are more optimally conceptualized in a hierarchical framework (i.e., the Hierarchical Taxonomy of Psychopathology, HiTOP) that transcends the categorical boundaries of the Diagnostic and Statistical Manual of Mental Disorders (DSM). However, the majority of this evidence comes from studies that draw upon predominantly European American or Caucasian populations. Whether a hierarchical conceptualization of mental disorders generalizes across racial-ethnic groups, including for African American (AA) populations, is unclear. Methods: We tested multidimensional and bifactor models of 15 DSM diagnoses and psychiatric traits in two groups, including AA (n=3,088) and European American (EA) (n=5,147) youths aged 8-21 from the Philadelphia Neurodevelopmental Cohort (PNC). We also conducted multigroup confirmatory factor analyses to test for factorial invariance between the best fitting AA and EA multidimensional and bifactor models. Results: In the multidimensional model tests, a three-factor model, specifying internalizing, externalizing, and thought dimensions, emerged as the best fitting model for AAs and EAs. In the bifactor model tests, a three-factor model (i.e., internalizing, externalizing, and thought dimensions) that also specified a general factor emerged as the optimal for both AAs and EAs. The general factor accounted for a significant proportion of the covariation between the secondary factors and the individual disorders and traits. Furthermore, both models were factorially invariant, indicating no significant difference in the factor structure of mental disorders between AAs and EAs in PNC. Conclusions: Results suggest that the hierarchical factor structure of mental disorders may be racial-ethnically robust. This finding has implications for etiological and epidemiological studies focused on racial-ethnic subgroup comparisons, particularly with respect to identifying similarities and differences in prevalence rates or sociodemographic risk factors for mental disorders.

About the Lab: James Li’s lab (the Social and Behavioral Development Lab) investigates genetic and environmental factors that contribute to the development of child externalizing disorders (e.g., attention-deficit/hyperactivity disorder, oppositional defiant disorder, and conduct disorder). Research in the lab utilizes molecular genetic approaches (e.g., genome-wide association scans, gene-pathway analysis) to advance understanding about the genetic architecture underlying complex developmental phenomena. They also focus on rigorous measurements of early environmental influences as they relate to child behavioral problems, not only for risk factors such as negative parenting and maltreatment, but also for enriched factors such as positive parenting and social support. The goal of this research is to understand how genes and environments independently and interactively influence variation in child social and behavioral development, and to ultimately bridge the substantial gap between genetics/neuroscience and prevention/intervention.