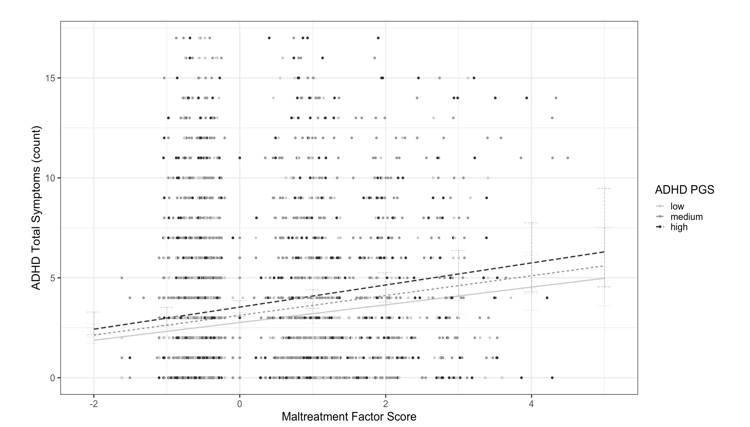 Title: A Gene‐Environment Interaction Study of Polygenic Scores and Maltreatment on Childhood ADHD

Legend: The interaction between a categorized ADHD polygenic score (PGS) and maltreatment factor score was insignificant, although the main effects of both were statistically significant (not shown). Not shown: The categorized ADHD PGS was derived based on an empirically tested cut-point that provided the best model fit in explaining ADHD symptoms. Maltreatment factor scores were derived from confirmatory factor analysis of the frequency of five types of self-reported maltreatment experiences.

Abstract: This study explored whether maltreatment moderates the association of polygenic risk for ADHD. Because individuals with low polygenic scores (PGS) for ADHD were previously shown to have better than expected functional outcomes (i.e., cogni- tive, mental health, social-emotional) than individuals with middle or high ADHD PGS, we hypothesized low ADHD PGS may confer a protective effect from maltreatment in the development of ADHD. Data were from participants with phenotypic and genotypic data in the National Longitudinal Study of Adolescent to Adult Health (Add Health; n = 4,722). ADHD PGS were generated from the most recent genome-wide association study on ADHD and categorized into three groups (i.e., low, medium, high) using empirically determined cut-points. A maltreatment factor score was derived from five forms of self- reported maltreatment experiences prior to age 18. ADHD PGS and maltreatment were positively associated with ADHD symptoms, as expected. However, no interaction between ADHD PGS and maltreatment on ADHD symptoms was detected. Despite the increase in predictive power afforded by PGS, the lack of an interaction between ADHD PGS and maltreatment on ADHD symptoms converges with an emerging body of PGS studies that have also failed to detect PGS-environment interplay in mental disorders. We discuss possible reasons for this pattern of results and offer alternative methods for future research in understanding gene-environment interactions.

About the Lab: James Li’s lab (the Social and Behavioral Development Lab) investigates genetic and environmental factors that contribute to the development of child externalizing disorders (e.g., attention-deficit/hyperactivity disorder, oppositional defiant disorder, and conduct disorder). Research in the lab utilizes molecular genetic approaches (e.g., genome-wide association scans, gene-pathway analysis) to advance understanding about the genetic architecture underlying complex developmental phenomena. They also focus on rigorous measurements of early environmental influences as they relate to child behavioral problems, not only for risk factors such as negative parenting and maltreatment, but also for enriched factors such as positive parenting and social support. The goal of this research is to understand how genes and environments independently and interactively influence variation in child social and behavioral development, and to ultimately bridge the substantial gap between genetics/neuroscience and prevention/intervention.