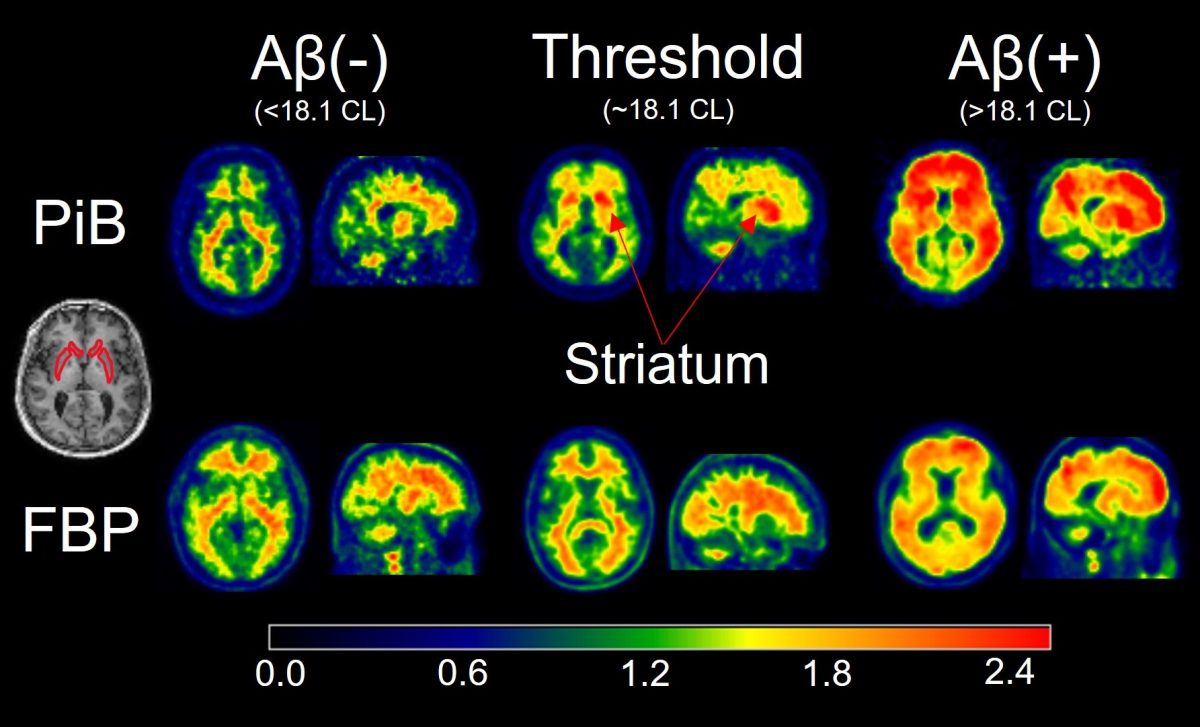 Abstract: PET amyloid [11C]PiB imaging has revealed early detection of Aβ in the striatum in individuals with Down Syndrome (DS), a group carrying genetic risk for AD. The goal of this investigation is to examine striatal binding of [11C]PiB and [18F]florbetapir (FBP) to determine if similar striatal uptake profiles are observed in individuals with DS. PET scans were acquired as part of the ABC-DS study. DS participants were scanned with either PiB (n=204; ages 25-56 yrs) or FBP (n=84; ages 40-85 yrs) at seven academic sites. SUVR images were created with acquisition times of 50-70min for both radiotracers, using a whole cerebellar reference region. ROIs were defined for the anterior ventral striatum (AVS) and the full cortex which included the AVS (CTX). SUVR was then converted to centiloids (CL) using published methods (Klunk 2015) with DS-specific modifications, including AVS extraction and approximate CL_AVS. Aβ(+) was defined using a threshold of 18.1 CL in CTX ROI (Zammit 2021), categorizing Aβ(-) and Aβ(+) groups. Comparisons across PiB and FBP examined 1) the proportion of CL_AVS values exceeding the threshold in the Aβ(-) group and 2) the difference between CL_AVS and CL_CTX in the Aβ(+) group. 58/204 subjects (PiB) and 72/84 subjects (FBP) were Aβ(+). For the Aβ(-) comparison, elevated CL_AVS was detected in 16/146 (PiB) and 0/12 (FBP). For the Aβ(+) comparison, 52/58 (PiB) and 52/72 (FBP) had CL_AVS greater than their CL_CTX. PiB PET exhibited higher uptake in the striatum during early stages of amyloid deposition. PiB revealed a 3.3x greater difference than FBP between striatal to cortical SUVR in the Aβ(+) group. Neuropathological investigation is ongoing to characterize these differences in striatal binding in DS. Despite this difference in early-stage binding, both PiB and FBP demonstrate high sensitivity for determining the presence of Aβ in DS.

About the Lab: Our research focuses on developing and translating novel PET methods for the study of neurodevelopment and neuropsychiatric illness. This involves using PET methodologies to investigate neurochemical changes in the brain and studying novel radioligands to characterize neurotransmitter-protein interactions and how they are influenced by development, genes, environment and drugs. These imaging methods are being applied to investigate the etiologies and mechanisms in diseases such as Down syndrome, affective disorders, schizophrenia, Alzheimer’s disease and Tourette syndrome. 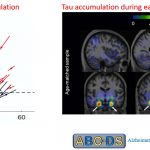 Adults with Down syndrome (DS) are predisposed to Alzheimer’s disease (AD) and reveal early amyloid beta (Aβ) pathology in the brain. Positron emission tomography (PET) provides an in vivo measure of Aβ throughout the AD continuum. Due to the high prevalence of AD in DS, there is need for longitudinal imaging studies of Aβ to better characterize the natural history of Aβ accumulation, which will aid in the staging of this population for clinical trials aimed at AD treatment and prevention.

Adults with Down syndrome (DS) are predisposed to Alzheimer’s disease (AD) and a characterization of glucose metabolism change throughout AD progression has yet to be performed in this population. Using FDG PET, regional glucose metabolism was evaluated across groups of cognitively stable DS (CS-DS), DS with mild cognitive impairment or Alzheimer’s disease (MCI-DS/AD), and healthy non-DS sibling controls. 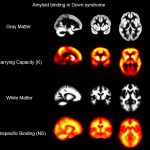 Individuals with Down syndrome (DS) are at increased risk of developing Alzheimer’s disease (AD) and show the earliest signs of amyloid-β (Aβ) deposition in the striatum. The metric for tracking Aβ burden using PET radiotracers frequently uses average standard uptake value ratios (SUVr) in signature regions of the brain specific to Aβ deposition.