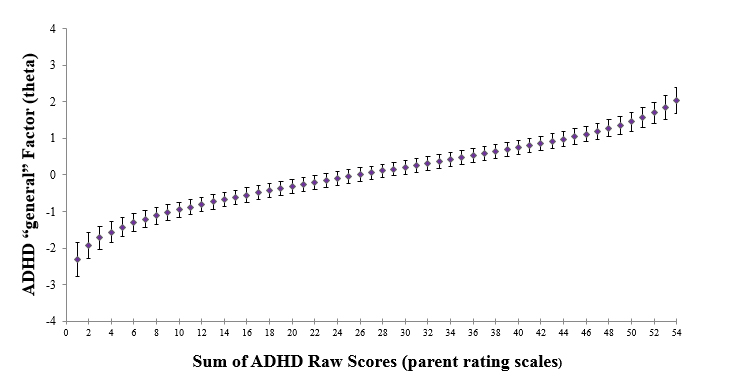 Title: Item Response Theory Analysis of ADHD Symptoms in Children with and without ADHD

Legend: The “continuum” of ADHD in children. The IRT analysis shows that there is minimal clinical difference (i.e., within 1 standard deviation of the mean) on the general ADHD factor between a child who scores a 9 and a child who scores a 43 on the parent-rated ADHD questionnaire. Yet, children routinely get diagnosed with ADHD using arbitrary cutoff scores that are usually well within that range.

Abstract: Item response theory (IRT) was separately applied to parent- and teacher-rated symptoms of attention-deficit/hyperactivity disorder (ADHD) from a pooled sample of 526 six- to twelve-year-old children with and without ADHD. The dimensional structure ADHD was first examined using confirmatory factor analyses, including the bifactor model. A general ADHD factor and two group factors, representing inattentive and hyperactive/impulsive dimensions, optimally fit the data. Using the graded response model, we estimated discrimination and location parameters and information functions for all 18 symptoms of ADHD. Parent- and teacher-rated symptoms demonstrated adequate discrimination and location values, although these estimates varied substantially. For parent ratings, the test information curve peaked between −2 and +2 SD, suggesting that ADHD symptoms exhibited excellent overall reliability at measuring children in the low to moderate range of the general ADHD factor, but not in the extreme ranges. Similar results emerged for teacher ratings, in which the peak range of measurement precision was from −1.40 to 1.90 SD. Several symptoms were comparatively more informative than others; for example, is often easily distracted (“Distracted”) was the most informative parent- and teacher-rated symptom across the latent trait continuum. Finally, results from the summed score to IRT scale score conversions indicated that there was significant variability on the latent trait continuum among individuals who had a summed score between 9 and 43 on the parent measure and between 5 and 41 on the teacher measure, as total raw scores within these respective ranges fell within 1 SD of the mean of the latent trait. Clinical implications for the assessment of ADHD as well as relevant considerations for future revisions to diagnostic criteria are discussed.

About the Lab: The goal of the Li Lab is to investigate the role of genes and environment as they relate to the emergence of behavioral and emotional problems in young children. The lab is specifically interested in identifying genetic factors that may simultaneously enhance the positive effects of environmental enrichment (e.g., positive parenting, resources, home stability), but also the negative effects of adversity (e.g., maltreatment, maladaptive parenting) over the course of development. The lab hopes that identifying these markers of susceptibility will pave the way for stronger prevention and intervention efforts.