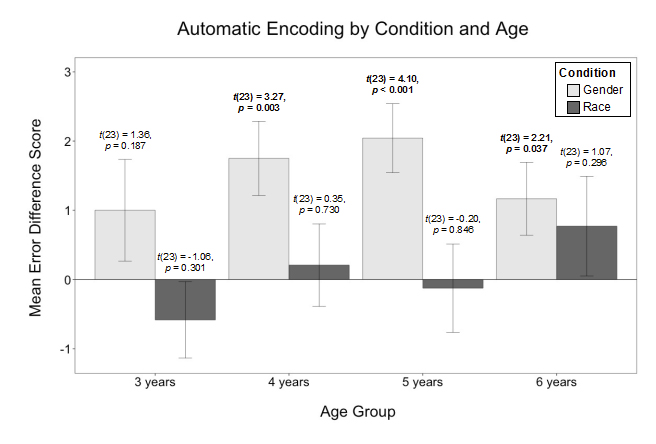 Legend: Mean encoding scores at each age in each condition. One-sample t-tests comparing performance to chance (0) appear above each bar in the graph. Error bars depict standard error.  Children encoded gender as early as four years of age, but no age group showed significant encoding of race.

Abstract: The present research investigated young children’s automatic encoding of two social categories that are highly relevant to adults: gender and race. Three- to 6-year-old participants learned facts about unfamiliar target children who varied in either gender or race and were asked to remember which facts went with which targets. When participants made mistakes, they were more likely to confuse targets of the same gender than targets of different genders, but they were equally likely to confuse targets within and across racial groups. However, a social preference measure indicated that participants were sensitive to both gender and race information. Participants with more racial diversity in their social environments were more likely to encode race, but did not have stronger racial preferences. These findings provide evidence that young children do not automatically encode all perceptible features of others. Further, gender may be a more fundamental social category than race.