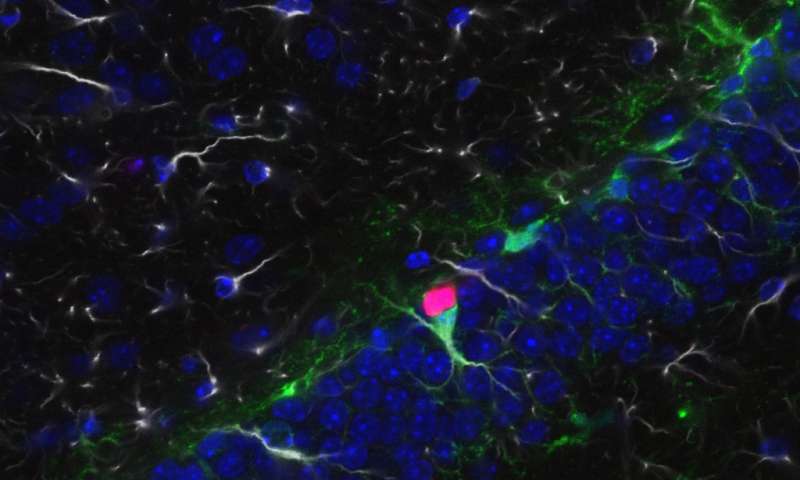 A University of Wisconsin-Madison researcher who studies the most common genetic intellectual disability has used an experimental drug to reverse—in mice—damage from the mutation that causes the syndrome.

Fragile X affects one boy in 4,000 and one girl in 7,000. It is caused by a mutation in a gene that fails to make the protein FMRP. In 2011, Xinyu Zhao, a professor of neuroscience, showed that deleting the gene that makes FMRP in a region of the brain that is essential to memory formation caused memory deficits in mice that mirror human fragile X.

The deletions specifically affected neural stem cells and the new neurons that they form in the hippocampus.

Tantalizingly, Zhao’s 2011 study showed that reactivating production of FMRP in new neurons could restore the formation of new memories in the mice. But what remained unclear was exactly how the absence of FMRP was blocking neuron formation, and whether there was any practical way to avert the resulting disability.

Now, in a study published on April 27 in Science Translational Medicine, Zhao and her colleagues at the Waisman Center at UW-Madison have detailed new steps in the complex chain reaction that starts with the loss of FMRP and ends up with mice that cannot remember what they had recently been sniffing.

This study’s newfound understanding of the biochemical chain of events became the basis for identifying an experimental cancer drug called Nutlin-3, which blocks the reaction.

In the new study, mice with the FMRP deletion took Nutlin-3 for two weeks. When tested four weeks later, they regained the ability to remember what they had seen—and smelled—in their first visit to a test chamber.

Statistically, the memory capacities of normal mice and fragile X models that were treated with Nutlin-3 were identical.

Still, many hurdles remain before the advance can be tested on human patients, Zhao says. “We are a long way from declaring a cure for fragile X, but these results are promising.”

Fragile X appears after birth, says Zhao. “Parents start to notice something is wrong, but even if they get an accurate diagnosis, there is no treatment at present. I’m encouraged because affecting this gene’s pathway does seem to reverse the memory impairment.”

The mouse memory test relied on curiosity. “We placed two objects in an enclosure and let the mice run around,” Zhao says. “Mice are naturally curious, so they explore and sniff each one. We take them out after 10 minutes, replace one object with a different one, wait 24 hours and put the mouse back in. If the mouse has normal learning ability, it will recognize the new object and spend more time with it. Mice without the FMRP gene don’t remember the old object, so they spend a similar amount of time on each one.”

The behavioral assessment was done by different people, says Zhao. “First author Yue Li, a postdoctoral researcher at Waisman, ran the test and sent the video to Michael Stockton, an undergraduate working on the project.” Stockton timed how and where each mouse was exploring, “but he had no idea which mouse was which,” Zhao says. “It was fantastic to see such clear data.”

Two other undergraduates, Jessica Miller and Ismat Bhuiyan (who is now in graduate school) and postdoctoral fellows Brian Eisinger and Yu Gao also worked on the study. The Wisconsin Alumni Research Foundation has applied for a patent on the discovery.

Nutlin-3, which can block the last stage of the chain reaction set off by a mutation in the FMRP gene, is in phase 1 trial for the treatment of the eye cancer retinoblastoma. Finding a new use for a drug that is approved, or that like Nutlin-3 and several derivatives, has entered the approval process, may shorten the lengthy FDA process, says Zhao.

The dose used in the trial—only 10 percent of the dose proposed for cancer chemotherapy—caused no apparent harm, she says. “We measured body weight and activity. So far, the mice look healthy and happy.”

Because more than one-third of fragile X patients are also diagnosed with autism, the study may shed light on that condition.

In any case, it’s far too soon to declare victory over fragile X, Zhao stresses. “There are many hurdles. Among the many questions that need to be answered is how often the treatment would be needed. Still, we’ve drawn back the curtain on fragile X a bit, and that makes me optimistic.”