Brown eyes afire and colorful skirt awhirl, Jackie Cleveland has been dancing since she could walk.

Now in sixth-grade, Jackie, who has Down syndrome, performs at Native American pow wows across the country, dancing traditional Ho-Chunk dances with style and unabashed joy.

“I think she was just born with the beat and a need to move!” says Danielle Cleveland, Jackie’s mother.

In fact, the first time Jackie came to the Down Syndrome Clinic at the Waisman Center, she showed off new-found cartwheeling skills. “Everyone was very excited,” says Danielle.

Jackie nods. “I want to be a dancer when I grow up,” she says, spinning gracefully and showing off her skirt with stripes of bright colors that she is wearing in honor of World Down Syndrome Day (March 21).

Helping individuals with Down syndrome, like Jackie, live a full and healthy life is an important aim of the Down Syndrome Clinic, says Maria Stanley, clinic director and a developmental behavioral pediatrician.

“We try to make sure that each individual is able to have the best life possible, however they define it. We also support the family so that they can help each individual have that opportunity,” she says.

For Jackie, that could mean working on her speech and communication skills. For her parents, that could mean helping them learn how to best help Jackie become more independent as she goes through puberty and enters her teenage years.

Others come to the clinic needing help with different challenges, such as feeding or sleep issues. “Some health problems co-occur more often with Down syndrome, and we want to make sure we are addressing those challenges because we know they can have a significant impact on quality of life,” says Stanley.

The clinic – a partnership with UW Health and American Family Children’s Hospital – doesn’t focus solely on challenges, though. Like all people, individuals with Down syndrome have challenges and strengths. “We really strive to understand the strengths of the individuals and families coming to the clinic,” says Stanley. “Then we work together to promote healthy development and maximum independence.”

Listening to individuals with Down syndrome and their families is key, says Amy Lyle, clinic coordinator and a social worker. “We not only talk about physical or emotional health but also about life, school, employment, friendships, and other aspects of life.”

For instance, while working with the Cleveland family, Lyle was struck by their commitment to Ho-Chunk cultural traditions and how they have involved their entire family.

For Jackie, that has meant dancing at pow wows all over the US, from Wyoming to Florida. “Jackie loves it,” says Danielle. “Other girls her age can be shy sometimes, but Jackie goes right up to the microphone and introduces herself. She even blows kisses!”

Whenever Jackie dances to the beats of a Ho-Chunk jingle dance, she is not only honoring tradition. She is also raising awareness about what individuals with Down syndrome can accomplish.

“When we started going to the pow-wows, we didn’t see any other children with disabilities,” says Danielle. “But that’s slowly changing, and we have met several children with Down syndrome. I feel proud that we are making a difference.”

While Jackie has been dancing for years, she started visiting the Down Syndrome Clinic relatively recently, and her path to the clinic was anything but straightforward. 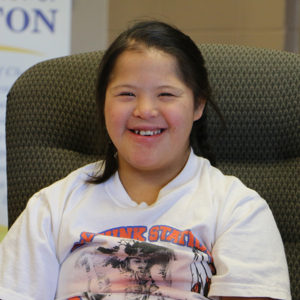 When Jackie was 9 years old, she was in an automobile accident. Her father, Garrick Cleveland, remembers pulling her out of the wreck. “She was bleeding from her head,” he says. “Her eyes were open, but she wasn’t responding.” Thankfully, after some frantic, desperate CPR, Jackie would recover consciousness.

Others have a more direct referral route to the clinic, and people come from all over Wisconsin and even parts of Illinois and Iowa. They are seen by an interdisciplinary team, who collaborate to provide care.  Team members, in addition to Stanley and Lyle, include clinical biochemical geneticist Jessica Scott Schwoerer, nurse Jean Marie Kammer, speech-language pathologist Elizabeth Delsandro, audiologist Jon Douglas, physical therapist Pat Edwards, occupational therapist Sharon Gartland, psychologist Lindsey McCary and genetic counselor Christie Turcott.

“We have a fabulous group of clinicians who have real passion for the work that they do and real care and concern for the individuals coming to the clinic,” says Stanley.

That’s a real strength, says Lyle. “We learn from each other, and together we can provide more comprehensive recommendations to families.”

Clinic visits have helped Jackie and the rest of her family, says Garrick. “As parents, you want to do what’s best for your child. Coming to the Down Syndrome Clinic makes us feel confident that we are doing just that.”

Today, Jackie is living a full and busy life. She goes to Olson Middle School in Mauston, Wisconsin – her favorite subject is math – and she enjoys spending time with friends and family, including her six brothers.

And she intends to keep on dancing.