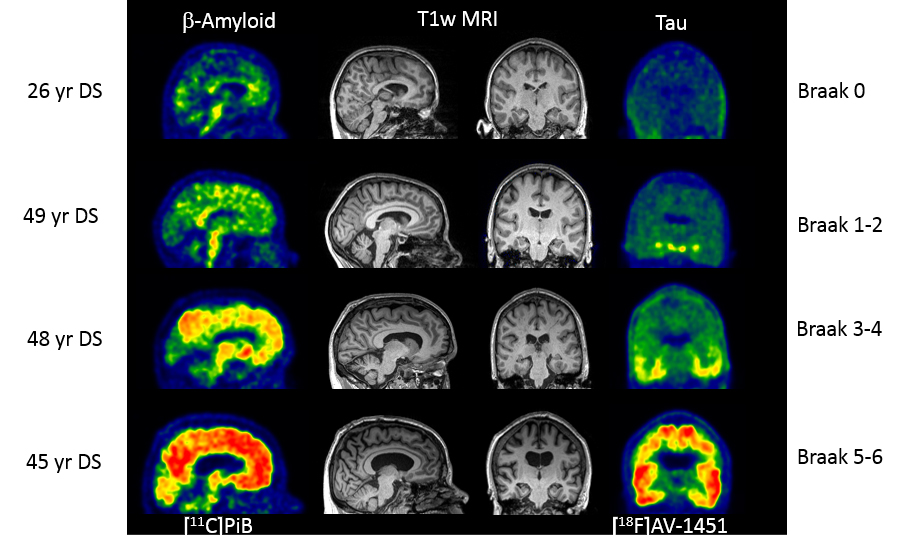 Title: Amyloid and Tau PET Imaging in Down Syndrome

Legend: Positron Emission Tomography (PET) imaging studies of amyloid and tau pathology in study subjects with Down syndrome.  The PET scans demonstrate subjects with a wide range of beta-amyloid and tau tangles present in the brain.  The top show shows a young person (26 yrs) with no obvious presence of amyloid or tau.  The bottom rows reveal study subjects with elevated levels of both amyloid and tau tangles.  These subjects are participating in a NIH supported project, “Neurodegeneration in Aging Down Syndrome (NiAD)” conducted by Waisman Center investigators. These PET measures can then be related to other biomarkers related to Alzheimer’s disease that are acquired as part of the study, including genetic, blood, CSF and cognitive based biomarkers.  This slide is part of a presentation that was given at the 2018 Alzheimer’s Association International Conference (AAIC) this summer in Chicago.

Abstract: Introduction – Trisomy 21 (Down syndrome; DS) leads to an overproduction of amyloid precursor protein and an increased risk for early Alzheimer’s disease. A study of the natural history of AD-related neuropathology is ongoing to gain an understanding of the distribution and time course of b-amyloid and tau burden in the brains of adults with DS. Establishing the trajectory between these preclinical AD biomarkers and the related decline in cognitive function will provide critical information for guiding therapeutic trials for the prevention of AD in both the DS and general populations. Methods – A first stage natural history study consisted of 68 nondemented adults (30-53 yrs) with DS. PET PiB and MRI scans and neuropsychological assessment were acquired at baseline and subsequently at 2-3 year intervals.  PiB SUVR was measured in cortical regions and the striatum and thresholds of PiB/amyloid positivity [i.e., PiB(+)] were defined. The study was recently expanded (NiAD) to include additional recruitment sites, larger sample size (target n=180) and additional biomarker measures including AV1451 tau PET.  Results – PiB(+) was observed in 23% (17/68) of the cohort with prevalence increasing with age, from 21% of the subjects <40 yrs to 50% of subjects >45 yrs. Regionally, elevated PiB was highest and most prevalent in the striatum, followed by precuneus, parietal and anterior cingulate.  The 3 yr post-baseline scans revealed increased rates of amyloid accumulation for subjects converting from PiB(-) to PiB(+) (4.9%/yr) and stably PiB(+) subjects (3.6%/yr) compared to stably PiB(-) subjects (0.5%/yr).  For the PiB(+) groups, amyloid in all regions increased at approximately the same rate and there was no significant change in grey matter volume. In the expanded NiAD study, tau PET scans are being acquired on these and additional subjects (n > 100 to-date).  Qualitatively, patterns of elevated tau burden are greater in PiB(+)vs. PiB(-) subjects, consistent with Braak staging seen in the non-DS population. Conclusions – AD-related neuropathology is evident at an earlier age in the DS population, with a striatum-first amyloid pattern.  Additional longitudinal scans will characterize the temporal and spatial patterns between amyloid and tau.

About the investigator: Christian’s research focuses on the use of positron emission tomography (PET) to interrogate molecular pathways involved in various brain processes. [11C]PiB imaging is used to detect Aβ plaques in elderly participants with and without Alzheimer’s disease, as well as young adults with Down syndrome. A variety of radiolabelled tracers such as [18F]THK5351, [18F]nifene, [18F]mefway, [11C]PBR28, and [11C]clozapine are also used to understand tauopathies, addiction, and neuroinflammation.