The Centers for Disease Control and Prevention’s recently released 2021 Community Report on Autism found that the prevalence of autism among eight-year-old children is continuing to increase. The report, which is based on data collected in 2018 by the CDC’s Autism and Developmental Disabilities Monitoring (ADDM) Network, estimates that 1 in 44 eight-year-old children were identified with autism. This is an increase from the last report which estimated the prevalence to be 1 in 54. These numbers are based on the 11 sites across the United States that the ADDM Network monitors.

While Wisconsin’s numbers remain lower than the national average, they are seeing a similar trend upward. The Wisconsin Surveillance of Autism and Other Developmental Disabilities System (WISADDS), which is one of the 11 sites that contributes to the ADDM Network, reported that approximately 1 in 53 eight-year-old children were identified with autism which is up from 1 in 59 two years earlier.

“We feel that likely one of the main reasons the prevalence of autism is increasing is improved awareness,” Maureen Durkin, PhD, professor of population health sciences and pediatrics and a Waisman Center investigator, says. “More and more pediatric specialists are being trained to identify and treat autism. The tools for identifying children with developmental concerns have improved and there’s just greater awareness.”

These data are not the only type that the ADDM Network and WISADDS collect. They also gather data on the characteristics of children with autism, what age they were diagnosed, their intellectual ability and disparities in identification. All of this information provides an important look into how and when autism is being diagnosed in these communities and it identifies places where autism supports and services can be improved.

“For many years, autism was kind of an invisible issue. It wasn’t really on the radar much as a public health concern,” Durkin says. “Once you see the prevalence numbers from this kind of public health surveillance, you can’t just ignore them. Then once the awareness is generated, we can use the numbers to gauge what resources are needed. The numbers help us realize we need to train more providers and do more research into the causes of autism and what interventions are the most effective.”

Alongside the increase in prevalence, the report noticed a positive shift in the number of children being diagnosed with autism before the age of four. It is important for autism to be diagnosed early since that is when a child can reap the most benefits from different supports and services. The CDC’s report found that children born in 2014 were 50% more likely to be diagnosed before the age of four than children born in 2010. This important move towards earlier diagnosis has the potential to improve outcomes for children with autism.

The ADDM Network and WISADDS provide invaluable data about autism. The data can influence how communities put together supports and services, how healthcare policies are implemented, how research is developed, and increase the awareness of the importance of early intervention. The CDC and Wisconsin will continue to collect data and use it to improve access to services and interventions. 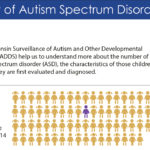 An estimated 1 in 59 school-aged children have been identified with autism spectrum disorder (ASD) according to a new report by the Centers for Disease Control (CDC). The latest estimate is higher than the prevalence in the CDC’s 2016 report (1 in 68 children). 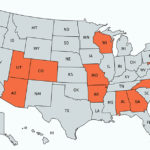 Children living in neighborhoods where incomes are low and fewer adults have bachelor’s degrees are less likely to be diagnosed with autism spectrum disorder compared to kids from more affluent neighborhoods. The finding is part …

An estimated 1 in 68 school-aged children have been identified with autism spectrum disorder (ASD), according to a CDC report published last week.