Legend: CMT1A is a peripheral neuropathy caused by duplication of the PMP22 gene, causing one of the most common heritable disorders affecting the nervous system. 21 candidate miRs were analyzed using qRT-PCR in a cohort of 109 CMT1A patient and 52 control plasma samples. Some of the most highly elevated microRNA’s are derived from muscle, and have been termed myomiRs, as they are elevated in muscular dystrophy. ROC plots are shown for a myomiR (-206) in comparison with the TMPRSS5 and NfL biomarker levels (released from Schwann cells and degenerating axons, respectively) from the same sample sets.

Abstract: Objective — The goal of this proposal was to determine if microRNA’s (miR) are elevated in the plasma of individuals affected by the inherited peripheral neuropathy Charcot-Marie-Tooth Disease, type 1A (CMT1A). Methods — We undertook a screen of CMT1A and control plasma samples to identify microRNAs that are elevated in CMT1A using a pilot screen of plasma miR by next generation sequencing, followed by validation of selected miRs by quantitative PCR, and correlation with clinical data and protein biomarkers. Results — After an initial pilot screen, a broader screen confirmed elevated levels of several muscle-associated miRNAs (known as myomiRs) along with a set of microRNAs (miRs) that are highly expressed in Schwann cells of peripheral nerve. Comparison to other candidate biomarkers for CMT1A (e.g. Neurofilament L, NfL) measured on the same sample set shows a comparable elevation of several microRNAs and ability to discriminate cases from controls. In addition, the putative Schwann cell miRs correlate with a recently described TMPRSS5 biomarker that is also elevated in CMT1A plasma, and this protein is most highly expressed in Schwann cells. Conclusions — These studies identify a set of miRs that are candidate biomarkers for clinical trials in CMT1A. Some of the miRs may reflect Schwann cell processes that underlie the pathogenesis of the disease. 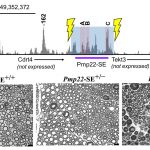 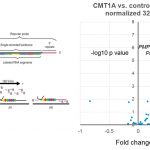 Charcot-Marie-Tooth (CMT) disease is most commonly caused by duplication of a chromosomal segment surrounding Peripheral Myelin Protein 22, or PMP22 gene, which is classified as CMT1A. Several candidate therapies reduce Pmp22 mRNA levels in CMT1A rodent models, but development of biomarkers for clinical trials in CMT1A is a challenge given its slow progression and difficulty in obtaining nerve samples. 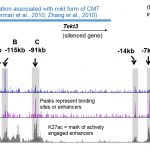 Peripheral nerve myelination is adversely affected in the most common form of the hereditary peripheral neuropathy called Charcot-Marie-Tooth Disease. This form, classified as CMT1A, is caused by a 1.4 Mb duplication on chromosome 17, which includes the abundantly expressed Schwann cell myelin gene, Peripheral Myelin Protein 22 (PMP22).