Brain development is an incredibly nuanced and complex process. It is a tightly orchestrated dance involving a wide variety of signals and stimuli. If even one component of that process is altered, brain development can be heavily impacted. Often in individuals with intellectual and developmental disabilities (IDD), those processes are affected resulting in the diversity of symptoms seen in IDDs. A new paper published by Anita Bhattacharyya, PhD, assistant professor of cell and regenerative biology at UW-Madison and a Waisman investigator, reveals that the differences in brain structure in individuals with Down syndrome (DS or Trisomy 21) may be due to disrupted signaling pathways that alter brain development to result in the incorrect number or placement of cells in the brain.

By analyzing postmortem cortical tissue from individuals with DS, Bhattacharyya and colleagues found that there are fewer of interneurons in DS. In the paper, “Altered Patterning of Trisomy 21 Interneuron Progenitors”, published in the journal Stem Cell Reports, they investigate the reasons behind this reduction in interneurons using DS iPSCs (induced pluripotent stem cell) models. Bhattacharyya and her collaborators found that the reason may be that the interneurons’ spatial awareness is disrupted.

Neurons start out as immature progenitor cells.  “This stage is where most of the decisions are made, where the cells start making decisions about what kind of neuron they are going to be. Are they going to migrate? What are they going to do,” Bhattacharyya says.

The interneuron progenitor cells make these decisions based on environmental cues such as the levels of chemicals around them. Those levels instruct the cells on not only what kind of neuron the progenitor cells should become but where in the brain the progenitor cell is. That spatial information is critical to the proper development of the progenitor cell into the correct neuron. “In this paper, we think that DS cells don’t respond very well to those cues. They may not know where they are. Their spatial awareness is different and then they may actually become something else because they think they are somewhere else,” Bhattacharyya says.

The inability to respond correctly to these cues may lead to a reduced number of progenitors becoming interneurons in individuals with DS. Fewer interneurons is believed to be a contributing factor for the intellectual changes seen in DS. The paper posits that the ultimate reason behind this change is a defective signaling pathway called the WNT pathway. The WNT pathway is an important component of neurons’ spatial awareness. The levels of WNT are one of the signals instructing progenitors.

To test this theory, Bhattacharyya added more WNT to their stem cell models to monitor its effect. She found that increased levels of WNT improved the progenitor cells’ development into interneurons further suggesting the WNT pathway is at least partially responsible for the reduction.

But Bhattacharyya and her lab are still trying to determine if it is an issue with the cell or with the pathway itself. “We’ve shown that it’s a problem with the progenitors for these interneurons. And even though we think we have identified the WNT signaling pathway as defective we still need to determine if it is a problem with the cell or with the environment. Because we are working with cell culture, we can manipulate both to find out,” Bhattacharyya says. The next big step is to show definitive causation between the disrupted WNT pathway and the reduced number of interneurons.

Bhattacharyya and her colleagues plan to continue to investigate brain development and function in people with DS using iPSCs. She feels this is an integral tool to move discoveries toward treatments and therapies.

“There are differences between mouse and human brains and how they develop, although many things are similar. There are some differences and many of the clinical trials and potential therapeutics for improving function in Down syndrome are based in mouse models,” Bhattacharyya says. “I think we need as much human data as possible so we can make more intelligently designed therapies. We need fundamental knowledge.” 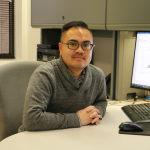 James Li, PhD, associate professor of psychology and a Waisman Center investigator, has been awarded the inaugural A.A. Alexander Professorship in recognition of his significant collaborations between the Departments of Psychiatry and Psychology at UW-Madison. 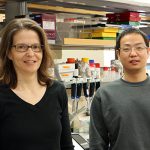 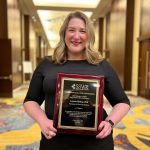 Lauren Bishop, PhD, an assistant professor in the School of Social Work and a Waisman Center investigator, was recently honored with the 2022 Deborah K. Padgett Early Career Achievement Award from the Society for Social Work and Research.