Over two decades of fundamental research in Parkinson’s disease led by Su-Chun Zhang, MD, PhD, professor of neuroscience and neurology at the University of Wisconsin-Madison and Waisman investigator, has culminated in the development of a promising stem cell-based treatment for the disease. The treatment is now entering into human clinical trials.

Zhang is a pioneer in stem cell research. He was the first in the world to direct embryonic stem cells into human brain cells, specifically neurons, in 2001. “We hoped that the cells would someday be useful for treating patients,” says Zhang.

Since then, his lab has developed essentially all types of neural cells, which they use to study disease processes and design therapeutics. As a trained physician, Zhang’s purpose has always been moving his research to the clinic. Now, he is closer than ever.

Zhang’s recent Parkinson’s work, done in collaboration with other researchers on campus and published in Nature Medicine, found that monkeys with Parkinson’s-like symptoms showed significant improvement in motor function, brain activity, and mood after receiving a graft of neurons derived from induced pluripotent stem cells (iPSC).

iPSCs are stem cells reprogrammed from skin or blood samples, that are then instructed to become other types of cells. In this case, the cells are differentiated into neurons that release dopamine — a chemical in the brain that is deficient in Parkinson’s. The lack of dopamine makes it progressively harder to control movement, a common symptom of Parkinson’s. Zhang had the idea for this study in 2008. However, because it was a novel study in monkeys, no government funding agency was willing to fund it. Finally, with a small grant from the Parkinson’s Disease Foundation, they were able to test if the stem cell grafting worked in monkeys. “And I think that piece of data convinced the NIH to give me money to start [the present experiment]. And that’s how we started,” says Zhang.

“And then it takes a really long time, because we want to mimic the clinical situation, meaning the monkeys develop Parkinson’s, for a few years, and then we do the transplantation [of dopamine releasing neurons],” explains Zhang. The experiments were done in older monkeys with Parkinson’s-like symptoms such as persistent slow movement, postural and gait imbalance, slight tremors and impaired gross motor skills, as well as depressive symptoms. This closely mimics Parkinson’s in a clinical setting.

Scientists then used a novel approach where the monkeys received a graft of dopamine neurons made from their own stem cells— known as autologous transplantation. The cells were specifically grafted at the striatum, a region of the brain involved in motor control that lacks dopamine signaling in Parkinson’s.

Half of the monkeys received autologous grafts, while the other half received grafts developed from stem cells obtained from other monkeys, also known as allogeneic transplantation.

All of the monkeys that received autologous grafts showed a substantial improvement in motor function, including increased amount of movement, speed, and fluidity.

“Our original expectation was that some will work, some will not. But they all worked. That was a good surprise,” says Zhang, impressed by the striking number of monkeys that showed recovery over 24 months after receiving autologous grafts.

Along with motor function outcomes, monkeys that received autologous grafts of stem cells had extensive growth in dopamine neuron axons – part of the neuron that transports signals – and increased dopamine activity as measured by positron emission tomography (PET), an imaging modality.

These behavioral and anatomical benefits were not observed in monkeys that received allogeneic grafts.

One downside to allogeneic grafts is that often times the body, recognizing cells as foreign, will activate the immune system to reject them. This was the case in this study. Monkeys receiving allogeneic grafts had ongoing inflammatory and immunological response up to 1.5 years after receiving the cells. This increase was not seen with autologous grafts.

Typically, rejection of the cells can be avoided by suppressing the immune system, which increases the chance of an infection.

For Zhang, the main take away points of this study are that “number one, the stem cell therapy for Parkinson’s disease, and potentially other neurological disorders works. Number two is that, if we are taking the autologous transplantation strategy, then it does not require immunosuppression, that actually helps, because it alleviates the pain for patients.”

Right when the research group was getting ready to wrap up and finish the study, Zhang realized there was one more important aspect of Parkinson’s they had not looked at. “When I was revising the paper, I asked my collaborator, ‘Did we look back on whether there is a mood change?’” This question, says Zhang, added three more months to their already long process. The encouraging results were worth the wait.

To their surprise, autologous grafts mitigated depressive symptoms in monkeys. “That was completely unexpected,” says Zhang. Even though Parkinson’s disease is regarded as a movement disorder, mood changes are another common symptom.

Zhang remembers having dinner with a colleague who had late-stage Parkinson’s disease. “When he tried to pick up his food, he began trembling, that’s the typical symptom,” says Zhang. “He struggled to even pick up the food to get it to his mouth. You can see how debilitating the disease is, and you can imagine how this impacts their mood.”

Zhang believes that the positive effect on mood observed in the monkeys that received autologous grafts could have been caused by a response to an improvement in motor symptoms. However, he believes the main reason for this improvement is the fact that the target regions grafted with new dopamine releasing neurons, also interact with areas related to mood and reward besides being involved in motor control.

“And I think that it turns out to be also very informative. When we design our clinical trial, we could potentially also target some of these [mood regulating] regions,” says Zhang.

Such a comprehensive study, including behavioral tests, brain imaging, histological analysis, and cell grafting experiments, required collaboration among multiple labs within the Waisman Center and other departments at UW-Madison.

“That’s the beauty of being in academia, and also being in Wisconsin, right? That’s part of the reason I have stayed in Wisconsin for 25 years. Because it’s a fairly collaborative environment,” says Zhang, who has collaborated with other researchers at UW-Madison including Marina Emborg, MD, PhD, professor of medical physics, director of Preclinical Parkinson’s Research Program and Wisconsin National Primate Research Center affiliate, and Bradley Christian, PhD, professor of medical physics and psychiatry, associate director of the Intellectual & Developmental Disabilities Research Center and director of PET Physics at Waisman Center.

Two decades and numerous research studies later, they are ready to move forward with clinical trials.

“I think the data is strong enough. I think it’s also very solid. It makes me really, really confident to move on”, says Zhang. Currently, Zhang and colleagues are in the process of designing clinical trials for autologous grafts to be tested as a treatment for Parkinson’s in humans.

Upon approval from the Food and Drug Administration (FDA), they expect to take skin cells from selected individuals with Parkinson’s disease, transform them into iPSCs to then reprogram then into dopamine releasing neurons. Lastly, they would graft the cells back to the patients’ brain and follow up two years later.

One of Zhang’s hopes is to also implement this therapy in other types of neurological disorders that he studies such as Alzheimer’s, spinal cord injury, and Huntington’s disease. “Ideally, it should also work for other neurological disorders. But each disease is different,” says Zhang. “There are many issues that you still need to solve for each of the diseases. But that’s why we work on one at a time.”

The progress toward clinical trials is the culmination of more than twenty years of basic research and the beginning of a promising therapeutic approach for a disease that currently has no standard treatment.

“It has been a very long journey,” says Zhang, to achieve these encouraging results. “If we compare today with what we saw 20 years ago, yeah, there is a gap. We expected something to happen much earlier. But the reality is, it takes a much longer time,” says Zhang. The timeline has been impacted over the years by challenges to stem cell research with government restrictions and funding shortages. “But in the end, we’re getting there. We are actually moving toward the clinic.” 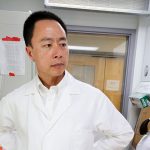 Grafting neurons grown from monkeys’ own cells into their brains relieved the debilitating movement and depression symptoms associated with Parkinson’s disease, researchers at the University of Wisconsin–Madison reported today.

The mature brain is infamously bad at repairing itself following damage like that caused by trauma or strokes, or from degenerative diseases like Parkinson’s. Stem cells, which are endlessly adaptable, have offered the promise of better neural repair. But the brain’s precisely tuned complexity has stymied the development of clinical treatments.

Su-Chun Zhang, MD, PhD, the Steenbock Professor in Behavioral and Neural Sciences at the University of Wisconsin-Madison and Waisman Center investigator, is part of an interdisciplinary team of researchers selected by the Aligning Science Across Parkinson’s (ASAP) initiative to receive $9 million over three years for the “Parkinson5D: Deconstructing Proximal Disease Mechanisms Across Cells, Space and Progression” or PD5D project.