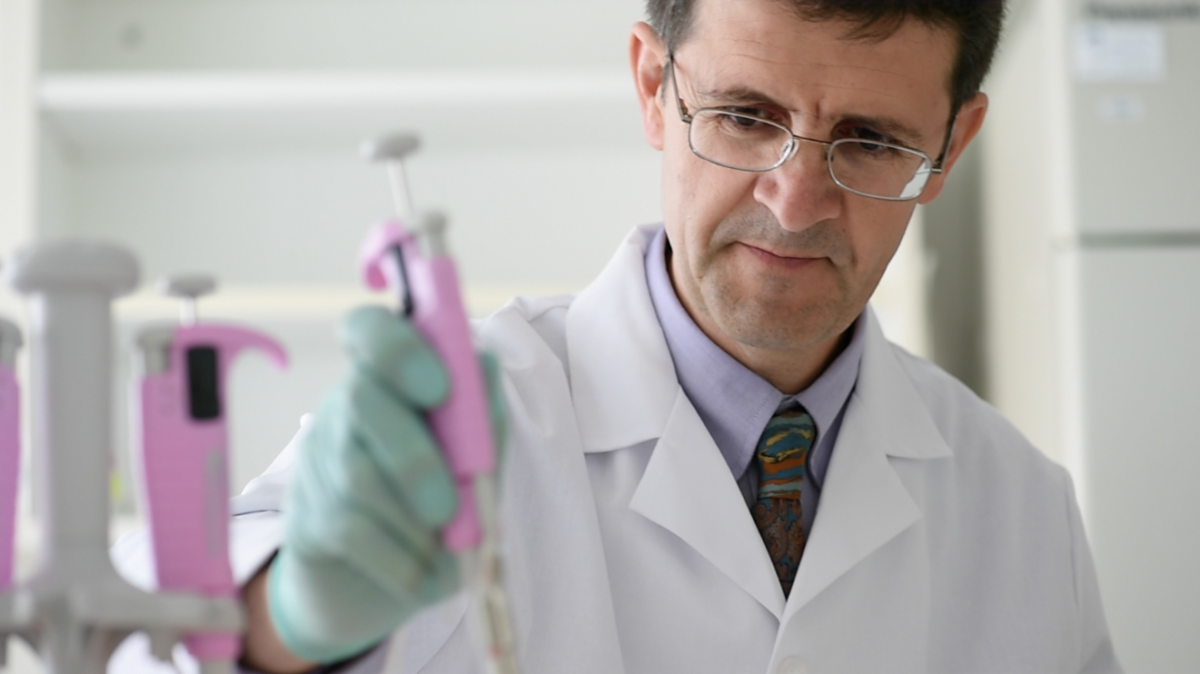 A new study from the lab of UW-Madison professor of medicine Luigi Puglielli, MD, PhD, opens a door to potential treatments for diseases of age, such as Alzheimer’s disease, by defining the roles of two enzymes that are imperative to protein production. “Endoplasmic reticulum acetyltransferases Atase1 and Atase2 differentially regulate reticulophagy, macroautophagy and cellular acetyl-CoA metabolism” was published in April in the journal Communications Biology.

Many diseases such as Alzheimer’s disease are known to be caused by a buildup of “bad proteins” within the cells. Sometimes when proteins are produced within a cell, they “misfold” and need to be disposed. In 2016, Puglielli proved that autophagy – or “one of the garbage disposal systems in the cell that gets rid of bad proteins or organelles” as Puglielli defines it – is regulated by the enzymes Atase1 and Atase2. The more efficient removal of such bad proteins allowed for the decrease of the symptoms associated with Alzheimer’s disease in mice.

In Puglielli’s present study, he focuses on the differences between these two enzymes in hopes of identifying one over the other as a potential therapy target. “In this work, we have shown that targeting ATase1 alone can help prevent Alzheimer’s disease in a mouse model,” says Puglielli, who is a professor in the Department of Medicine and an investigator at the Waisman Center and the Madison VA Medical Center. “This is helpful because it may allow us to target just one enzyme instead of both for therapeutic benefit in Alzheimer’s disease and other diseases of age.”

Puglielli says he was very surprised to discover that the small differences in the two enzymes have such large consequences. “These enzymes are 88% similar when you look at their protein sequence, but our recent work has shown they play different roles in cell biology,” he says.

To perform this study, the research team, with graduate student Michael Rigby as lead author, adjusted enzyme levels in mice with symptoms of Alzheimer’s disease. They then inhibited – or “knocked out” – Atase1 and Atase2 individually and studied the autophagy that resulted.

Atase1 and Atase2 are used in the body to enhance a protein regulation process called acetylation. “Acetylation is a chemical modification of proteins that can affect the ability of the protein to function and interact with other proteins,” Puglielli says. Once enhanced by these enzymes, acetylation in turn becomes a more efficient regulator of autophagy, the protein disposal process.

For their part, Atase1 and Atase2 are located in an area of the cell called the endoplasmic reticulum (ER), an organelle that Puglielli has spent a lot of time studying. “The ER is responsible for a number of cell functions including synthesis of new proteins, production of hormones, and detoxification of drugs,” he says.

Although this present study focuses on Alzheimer’s disease, the implications of the research are broad enough to extend to other disorders with similar underlying mechanisms. “We targeted a mouse model of Alzheimer’s disease because it is a fundamental disease model where neurons experience a buildup of bad protein aggregates,” Puglielli says. “However, this concept can be extended to many other diseases where there is an accumulation of bad proteins in the ER, including hereditary sensory autonomic and motor neuropathies where mutations in a specific gene causes the nervous system to accumulate toxic protein aggregates.”

Examples of such other disorders include certain forms of Charcot-Marie-Tooth disease, Pelizaeus-Merzbacher-disease, or spastic paraplegias. The same concept can also be extended to Down syndrome where there is an increased risk for Alzheimer’s disease.

With such a wide variety of disorders that can be impacted by these discoveries, it is possible that just as many therapies may be on the horizon.

“We hope to expand the list of possible drugs to treat or prevent diseases of age, such as Alzheimer’s disease, as well as genetic disorders caused by the overaccumulation of bad proteins in the ER,” Puglielli says. “With so many drugs that fail clinical trials, we want to refine the list of potential drugs such as by targeting only ATase1 and not ATase2. This may make the drugs more specific and hopefully have less side effects.”