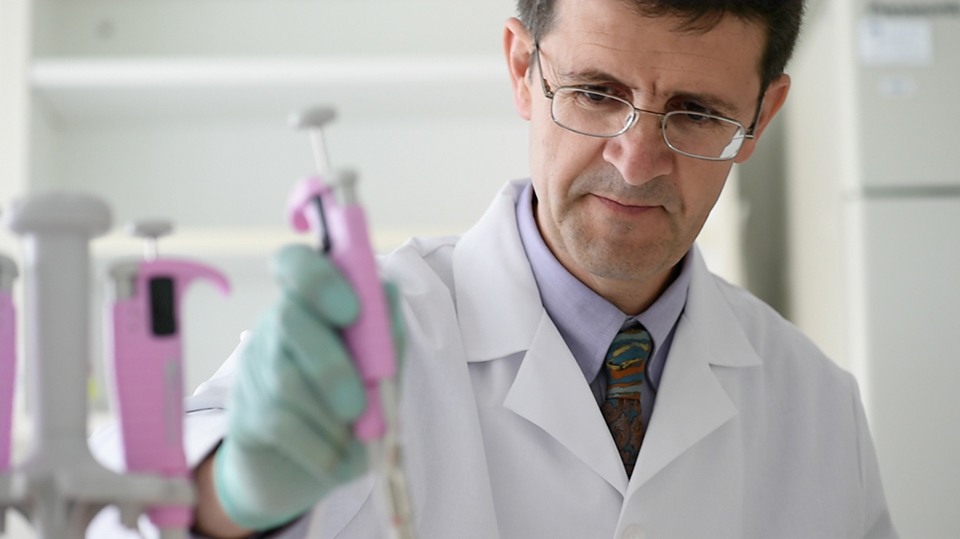 Waisman Center investigator Luigi Puglielli had trouble with only one class in medical school: biochemistry.

Yet today he uses biochemical approaches to study some of the vital molecular mechanisms that regulate brain physiology and pathology across the lifespan.

Puglielli, who is a professor in the Department of Medicine, focuses on trying to understand how proteins are tagged with a chemical label through a process called acetylation in specific areas within our cells.

Acetylation of proteins has many functions. For example, it is “important for the development of the brain but also plays a role in several neurodegenerative diseases that affect the brain,” says Puglielli. “Mutations that affect acetylation turn out to be significant factors for various disorders, including autism spectrum disorder and intellectual disability, spastic paraplegia, and Alzheimer’s disease.”

Until a decade ago, scientists believed that proteins were acetylated in two specific locations within cells – the nucleus, which contains our DNA and serves as the ‘control center’ of the cell, and the cytosol, which is the soupy environment surrounding the nucleus.

In 2007, Puglielli discovered a third location where proteins are acetylated, and “at that time, based on what was known, it was an impossible result,” he says.

So for the next several years, he and his research group focused on determining whether these “impossible” results were actually true or not. And they waited for independent confirmation of their findings.

“It was two years after we published our initial results that another lab confirmed them,” says Puglielli. “Then I could sleep again!”

The third location that Puglielli’s research had identified as a site for acetylation was the endoplasmic reticulum or ER, a lacy network of tubes made of proteins and lipids that extend out into the cytosol from the membrane surrounding the nucleus.

“This discovery launched a series of questions,” says Puglielli. “In fact, the entire machinery as to how proteins were being acetylated in the ER was a mystery.”

Puglielli’s research group would go on to discover how this machinery works and start to understand its biological functions, which, in turn, opened up a whole new set of questions.

Communication is the key

A major function of protein acetylation in the ER is facilitating the chatter that keeps our cells running smoothly.

“How does my right hand know what my left hand is doing?” asks Puglielli. “My brain is coordinating both of them, of course, through a network of nerves.”

But there are no nerves inside the billions of cells that make up our bodies. How do the tiny organelles within these cells – from the mitochondria that generate energy to the ribosomes that manufacture proteins – know what the other organelles are up to? How can they all work together to keep the cell functioning and us alive?

That’s where acetylation of proteins comes in, says Puglielli. Acetylation can affect several features of proteins, including where within the cell they aggregate, which other proteins they can interact with, and even whether they are able to take part in biochemical reactions.

A quest for knowledge and healing

Since the cross-talk between the various cell organelles is a fundamental necessity for life, there are several mechanisms that serve as fail-safes, says Puglielli.

“If we can get to the bottom of how the organelles in a cell work together, we can really understand many diseases and start to find new ways to develop therapies,” he says.

The concept that the disruption of a single biological process, such as acetylation of proteins in the ER, can lead to many different diseases can seem a bit counter-intuitive. But Puglielli says that “when you examine the biochemistry, you realize that depending on how a biological process is altered can lead to many different disorders across the lifespan.”

Some of these disorders – like Alzheimer’s disease – may take several decades to develop, because other biological processes may be able to partially compensate for the disrupted process. Others disorders, like autism, may manifest soon after birth.

Puglielli is searching for novel therapies for the prevention and treatment of the neurodevelopmental and neurodegenerative disorders associated with dysfunctional ER acetylation of proteins.

His research also includes trying to better understand the molecular mechanisms of cognitive loss during aging and Alzheimer’s disease. “We are always asking questions, and sometimes we answer the questions successfully,” says Puglielli. “Then it’s immediately on to the next question, and how we can answer it.”

These unknowns fuel Puglielli’s research. “Science gives you the excitement of a quest,” says Puglielli. “You are always out there on a big ocean, and you have to deal with the winds and the waves as you search for new lands. But when you spot an undiscovered island, when you make a new discovery that could lead you to help people, the feeling is incomparable.”